Already the yay-or-nay shorthand verdict for X-Men Origins: Wolverine has been decided upon, and that’s whether or not it’s better or worse than Brett Ratner‘s X-Men: The Last Stand. Which is why Justin Chang‘s Variety review could slightly encourage Fox marketers since he says that Wolverine “overpowers” X-Men 3. This reminds me of the first instant analysis about Waterworld after the first press screening — i.e., “It doesn’t suck.” 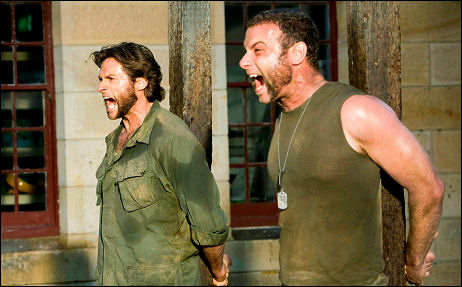 “Heavily fortified with adamantium, testosterone and CGI, X-Men Origins: Wolverine is a sharp-clawed, dull-witted actioner that falls short of the two Bryan Singer-directed pics in the franchise but still overpowers 2006’s X-Men: The Last Stand. For all its attempts to probe the physiological and psychological roots of its tortured antihero, this brawny but none-too-brainy prequel sustains interest mainly — if only fitfully — as a nonstop slice-and-dice vehicle for Hugh Jackman.

“Jackman just about holds things together with his reliable but hardly revelatory all-brooding-all-the-time act; for sheer bellowing rage, he’s occasionally upstaged by Schreiber, whose grisly, vampiric presence has some interesting points of overlap with his role as another volatile bad-seed brother in Ed Zwick‘s recent Defiance.

“Noisy and impersonal, X-Men Origins: Wolverine bears all the marks of a work for hire, conceived and executed with a big budget but little imagination — an exception being Barry Robison‘s intriguing production design for Stryker’s island compound. Shot in Jackman’s native Australia, the pic is apparently set in the 1970s, though one would have to read the press materials to realize this.

“An unfinished print leaked online weeks before the film’s May 1 Stateside release will prove a mere flesh wound to Fox’s B.O. haul, which should be muscular locally and abroad.”