The news broke yesterday that the Paris transport authority, RATP, has transformed itself into a kind of bureaucracy of the absurd by removing the trademark pipe of Jacques Tati, the legendary absurdist French director and actor, from a poster advertising a Tati retrospective at the Cinematheque Francaise over concerns that an image of a pipe violates laws preventing the advertising of tobacco products. 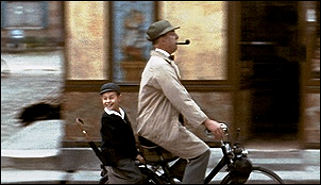 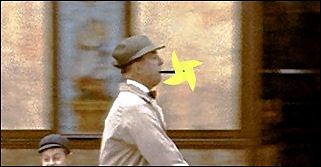 The poster image is a famous shot of Tati/Hulot riding a bike in his classic 1958 film Mon Oncle. The pipe is Hulot’s trademark as much as the bowler hat and cane are trademarks of Charlie Chaplin, but p.c. dictums have erased it as far as the retropsective is concerned. In it place the Paris censors have inserted a yellow children’s windmill.

Metrobus, the publicity wing of the Paris public transport network, told reporters that “allowing Monsieur Hulot to smoke on buses and underground metro platforms would be an infraction of the law banning advertising of alcohol or tobacco.”

Director Costa Gavras, president of the Cinematheque Francaise, told Le Parisien that the ruling “is absurd and risible…I think it would have made [Tati] die of laughter.”