Kevin McDonald‘s State of Play is a straightforward, right-down-the-middle, old-fashioned print newspaper story — well-ordered and comprehensible. (More or less.) “Old fashioned,” I mean, in the following of a well-trod path. It’s a thriller about a dogged print reporter (Russell Crowe) getting to the bottom of a complex Washington scandal involving the usual killings, corruptions, strained alliances, infidelities, chase sequences, etc. Lord knows we’ve been down that road time and again. 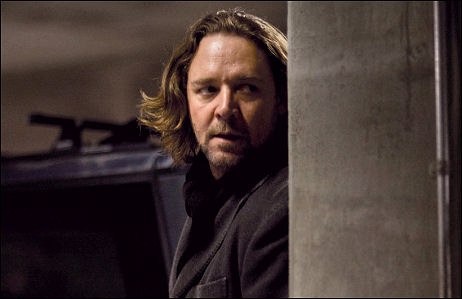 The wrinkle this time is Crowe’s shaggy-haired Washington Globe reporter pooling forces with a fellow employee who is also, in a sense, the enemy — a bloggy-blog columnist (Rachel McAdams) who riffs about the social dirt in Washington, D.C., but who now needs to follow Crowe’s shoe-leather methodology to open up a story that involves a U.S. Congressman (Ben Affleck) and the killings of persons tied to his background as well as ongoing investigations into a Halliburton-like corporation.

In a way, State of Play feels like a kind of farewell valentine to the traditions and disicplines that define serious journalism. McDonald is clearly lamenting their erosion, which is mainly due to competition and influence from the 24/7 digital-blog economy, which tends to favor shoot-from-the-hip analysis over in-depth investigations. And yet the film’s undercurrent is telling us that the economic system that supports traditional reporting is weakening and perhaps losing its will.

I was reminded of the emotional currents in Jack Webb‘s -30-, a cornball newsroom drama made in 1959 . (And which is pretty much extinct itself, not being on VHS or DVD or, to my knowledge, broadcast TV.) Webb’s sentimental depictions of the lives of reporters and copy boys and editors cranking out a daily edition are echoed after a fashion by State of Play‘s closing-credits montage. It shows a newspaper being printed with huge paper rolls and printing presses and delivered by huge ten-wheeler trucks — all of these being phased out as we speak. Talk about your sad elegies. 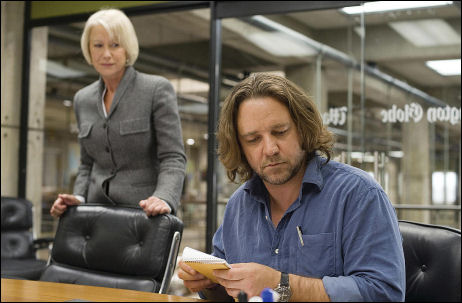 Plus I loved that you can actually comprehend what’s going on — I was always trying to chase the revelations in my head and keep up with it, but it never got too far ahead of me. (Unlike with Tony Gilroy‘s Duplicity, which made me feel a little bit like a dumb-ass.)

I found the portrayal of the tension and rivalry between the online and print newspaper cultures via Crowe and McAdams’ relationship to be satisfying and symmetrical and the right way to go. And I loved that Crowe was strictly nuts-and-bolts in this — ballpoint pen, note pad, shoe leather, just-the-facts, no swaggering-actor crap.

I had been skeptical about the pruning choices in getting the original six episode, 300-minute British miniseries down to two-hours plus. (What is it, 130 minutes?) I’ve watched the British version, which is obviously a fuller and more detailed meal in some respects.( I loved the relative anonymity of the British actors, the standout being Bill Nighy as the paper’s senior editor). The upside is that the honing has demanded a story discipline on the part of McDonald & Co. that kept everything extra disciplined and tightly focused. No time for any funny stuff. 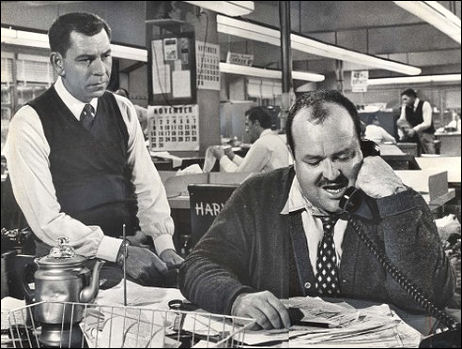 I love that McDonald directed and not Ridley or Tony Scott or (no offense) Paul Greengrass. All of these guys would have made State of Play into something a lot more style-hyper. (And I don’t mean this as a putdown — it’s just who they are & what they’re expected to do.) They would have flash-edited and whirly-gigged this film into a kind of power-pop fashion statement about breathless shooting styles in the Age of Obama — agitation and coolness first, newspaper reporting second.

McDonald, appropriately and fittingly, adheres to just the facts. He keeps the visual style moderate and makes the story clear and understandable, the way a good piece of reporting in the N.Y. Times or the Washington Post would be. On top of which McDonald seems to almost go out of his way to avoid the usual urban-thriller elements. Which is my book is a good thing.

Beware of mini-spoiler!: Crowe’s shaggy Kodiak bear appearance gets in the way of believing in a subplot about his character having previously had an affair with Affleck’s wife, Robin Wright Penn . I’ve never written a paragraph about Washington, D.C., but it’s impossible to buy into the notion of a classy Congressional wife fucking around with an overweight, hippie-haired reporter, even if they’ve known each other since college.

Helen Mirren brings a certain agitated saracasm to her one-note role as the Globe‘s editor. Jeff Daniels is droll and fully believable as a senior D.C. legislator who’s peripherally involved.

[Note: The preceding ran last Friday in the reader comments section, but has been rewritten and expanded upon.] 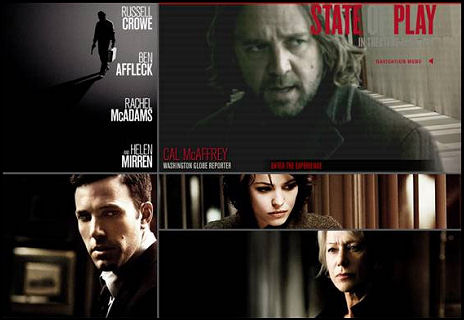