Ondi Timoner‘s We Live in Public will be closing the “New Directors, New Films” series early this evening at the Museum of Modern Art. I met with her a little more than a week ago. I decided to wait for tonight’s screening (rather than request a screener) to see it again. I saw it in a Sundance screening booth the first time. Now I want to feel how it plays with a crowd. 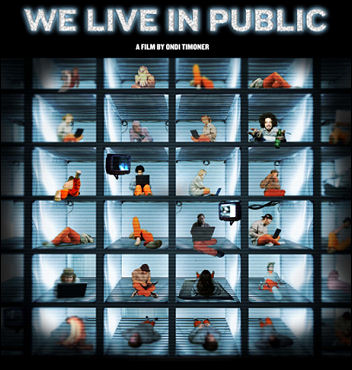 We Live in Public, which is easily one of the most thought-provoking docs I’ve seen (as well as the most disturbing), is about ’90s internet pioneer and onetime dto.com milionaire Josh Harris. Timoner documented Harris’s life for more than a decade “to create a riveting, cautionary tale of what to expect as the virtual world inevitably takes control of our lives,” as one synopsis reads.

My attraction/fascination with We Live in Public is based on the fact that my life as an 24/7 internet columnist is necessarily obsessive and all-consuming, and that Harris’s experience is somehow reflective of my own. I’m an extreme case, but I suspect that everyone with a computer and/or a smart phone is succumbing to the virtual world as well — and at the same time losing touch with the semi-natural/organic life that we all knew before digital seeped in.