“Blasting onto the screen at warp speed and remaining there for two hours, JJ Abrams‘ new and improved Star Trek will transport fans to sci-fi nirvana,” writes Variety‘s Todd McCarthy. “Faithful enough to the spirit and key particulars of Gene Roddenberry‘s original conception to keep its torchbearers happy but, more crucially, exciting on its own terms in a way that makes familiarity with the franchise irrelevant, Abrams’ smart and breathless space adventure feels like a summer blockbuster that just couldn’t stay in the box another month. 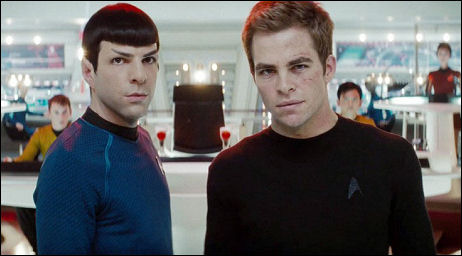 “Star Trek here joins the James Bond series as the long-term ’60s franchises that have been most successfully rebooted, although the current accomplishment is the more surprising since, after 10 films and a succession of TV series, Star Trek was widely thought to have exhausted itself. While respectfully handling the Roddenberry DNA, Abrams and longtime writing cohorts Roberto Orci and Alex Kurtzman have successfully transferred it to a trim new body that hums with youthful energy.”

I wont see it until, like, the 30th, but here’s an impression I tapped out after seeing a half hour’s worth of footage last December:

“It zips along and is enveloping and beautiful to watch — highjly pleasurable to just friggin’ look at. It’s buoyant and bountiful of spirit, it’s pop celestial, it’s Young Men in Space. The massive super-cities shrouded in mist in the Iowa flatlands — superb concept! Zachary Quinto‘s Spock has focus and authority, and was my favorite for that. Pine, for me, has the necessary force and swagger and I applaud Abrams’ balls in not casting a Shatner clone.

“Pine is certainly an everyman James Tiberius Kirk. A Kirk who is first brawn, anger and bluster, and secondly a Kirk who develops the character and courage to grow his inner strength. A Kirk who is part Luke Skywalker, part surfing instructor, part lifeguard, part first baseman for the St. Louis Cardinals, partly a guy who could have costarred in Mike Judge‘s Office Space, part poet, part motorcycle mechanic.”