Sony has obvious cause for cheering at Ron Howard‘s Angels and Demons having pulled down an estimated $16.6 million yesterday (i.e., Friday) in 3,527 theaters and who-knows-how-many screens.

That’s $12 million less, of course, than The Da Vinci Code‘s opening-day haul three years ago. It made a reported $77.1 million for the weekend, so figure Angels and Demons to do a bit more than half that by Sunday night. $41 million and change.

I’ll give Demons points for being less talky and faster paced than Da Vinci Code. Howard moves it along at high crank. But watching and submitting to this feels like whirlings inside an asylum — like you’re trapped in a crazy steroid game in Dan Brown‘s head. And yet I couldn’t get into a hate mode. That seems to be the general reaction, i.e., “it’s pretty bad but I didn’t mind it.”

In a 5.15 HuffPosting, Dana Kennedy writes that Precious costar Mo’Nique “could take Meryl Streep in an Oscar bar fight one-handed — and clean the floor with her. She scared me to death [as] the monstrous mother of an obese Harlem teenager and incest victim named Precious (an excellent Gabourey Sidibe.)

“For most of the movie, Mo’Nique is seated in an armchair in her grim apartment like a black female Dr. Evil, ordering Precious around like a servant, insulting her with the worst vitriol, forcing her to overeat — and occasionally getting up to slam her head against the wall. Mo’Nique felt so dangerous it was as if she might step out of the screen and come punch me in the face any minute.”

But Kennedy doesn’t mention Mo’Nique’s final clincher scene, shared with Sidibe and Mariah Carey in a welfare office — a scene that is pathetic, ghastly and yet emotionally wide open. Mo’Nique tries to explain how she’s “not a monster” and that she allowed her longtime boyfriend to abuse Precious from early childhood on because she didn’t have the strength to tell him not to touch her daughter and that she paradoxically came to resent Precious for diverting his interest away from her. The scene is horrific and disgusting, but unforgettable for the way Mo’Nique makes you feel just a smidgen of sympathy. (But no more than that.)

The scene made me question why director Lee Daniels never acquaints the viewer with the boyfriend-rapist-father in any depth.

It seems likely, in any case, that Mo’Nique will get some Best Supporting Actress heat out of this. Certainly with the critics groups. Older conservative Academy members might just turn off to the whole thing. But there’s no mistaking that Precious is finally about caring and compassion. 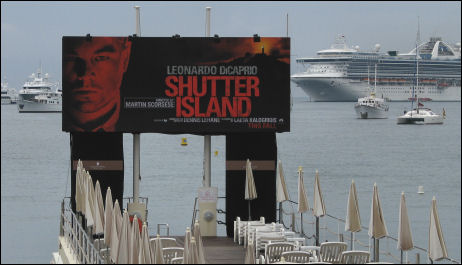 I’m telling myself this is passable enough to post because at least it captures the brilliant blue sky and the faintly misty sunlight and yaddah-yaddah. It’s very calming and good for the soul. Taken 40 minutes ago from a catwalk outside the third-floor Orange wifi cafe inside the Palais. Taking good, semipro-level video is hard, and I’m too time-crunched and not sufficiently tech-adept to edit out the weak stuff. My skills will eventually improve.

“A sort of let’s-put-on-a-show summer-camp lark for director Ang Lee after the dramatic rigors of Brokeback Mountain and Lust, Caution, Taking Woodstock serves up intermittent pleasures but is too raggedy and laid-back for its own good, its images evaporating nearly as soon as they hit the screen,” declares Variety‘s Todd McCarthy. 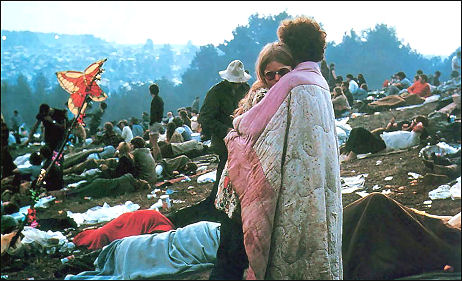 “Given the film’s vast canvas and ambition to provide a kaleidoscopic portrait of a generational movement, the personal issues of Demetri Martin‘s Elliot Tiber — his feelings of responsibility to his immigrant parents, closeted gay status and general behavioral uptightness — seem unduly magnified in relation to everything else that’s going on.

“Elliot (who in real life was 34 at the time, older than the ‘generation’ in question) is a mild-mannered, unassertive guy without much electricity as a central screen presence. In the role’s conception and casting, Elliot is clearly patterned after Dustin Hoffman‘s Benjamin Braddock in The Graduate, but the effect isn’t remotely the same.

“Despite being temporally defined by the run-up to the fest and the weekend itself, the pic has a formless, unstructured feel, as its attention jumps from incident to incident in almost random fashion. Some distantly heard music serves notice that Woodstock itself has begun, but the stage is only ever glimpsed from atop a faraway hill. The musical performances are clearly not the subject of the film, but there’s no denying that their absence makes Taking Woodstock feel oddly incomplete; the table is set, but the meal never gets served.

“Other than the oddly extended attention devoted to the harsh irascibility of Elliot’s unbendingly greedy mother, pic is pleasant enough on a moment-to-moment basis, but the separate sketches never coalesce into anything like a full group portrait.”

Excerpts from my 5.15 Taking Woodstock review: “It too often feels ragged and unsure of itself…Elliot’s story comes through but [it seems analagous] to a story of the D-Day Invasion that focuses on Francois, a closeted young man in his 30s who doesn’t want to work at his parents’ Normandy bakery any more…Elliot was a man of 34 who’d been around a bit — Martin plays him like Dustin Hoffman’s Benjamin Braddock…no Woodstock concert footage is mixed into Lee’s movie, and [while] I kept telling myself that it’s Eliot’s story, not Woodstock II, I wanted glimpses of the real thing…the story is weakened, in my book, by Imelda Staunton‘s strident and braying portrayal of Tiber’s mother-from-hell…[the film] doesn’t coalesce in a way that feels truly solid or self-knowing.”

Okay, so I got it wrong with Guillaume Canet/Albert Brooks thing, but a note to Movieline‘s Seth Abamovitch regarding his item about same. That photo of Brooks that you call “era-appropriate” (i.e., late ’70s) is not, I’m afraid. I speculated that the photo was of Brooks in ’79 or thereabouts. His close-cropped haircut and slightly filled-out face in your photo tells me it was taken around the time of Lost in America (’85). Brooks definitely had a modest Jewfro thing going in the mid to late ’70s.

I slept through the 6:45 am wake-up and it’s now…uhm, 12:05 pm. This happens. Four days of 19-hour-a day blitzkrieging (on top of faintly lingering jetlag) and the body takes over and says “we’re getting the sleep we need — that’s it, period, end of discussion.” I won’t make the 1 pm Taking Woodstock press conference. Screenings of Ne Te Retourne Pas at 1:30, Samson and Delilah at 4:45, and Kinatay at 7:30.