In his latest thelmagazine video essay, Matt Zoller Seitz explains that while Steve McQueen will always be Steve McQueen, “calling him a great actor, or even a great leading man, is a bit of a stretch.” The piece is linked to the McQueen tribute that begins today through the Film Society of Lincoln Center. 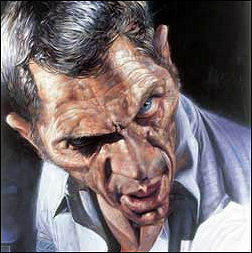 “Steve McQueen is the gold standard for movie tough guys,” he begins. “Stoic, street-smart, unfussy, supercompetent and absolutely, positively not to be fucked with; the consummate man of action. He’s the guy every guy secretly wants to be — unassuming but deadly, and always in charge. McQueen’s grace isn’t the deliberate, predmeditated grace of a ballet dancer, but of a footballer spotting an opening and slipping through it for a goal.

“He’s one of the most sheerly pleasurable physical actors in movie history. Even in repose or when performing mundane tasks, he seems charged with energy. The camera loves him, and directors acknowledge this by serving up seemingly obligatory scenes of McQueen donning and divesting himself of his character’s uniform (the bulletproof vest in The Getaway, the shoulder holster in Bullitt), giving viewers a chance to admire his lanky physique and a demeanor that would seem insufferably smug if he weren’t a working class guy playing working class guys — a peasant prince who earned his royal title.

“McQueen doesn’t join the club, he just visits, always keeping one eye on the exit.

But after thinking things through, Seitz’s McQueen infatuation “got downgraded to affection and respect,” he says. “A masculine code that insists on always being right and in control, and that withholds affection from women for the sake of seeming cool, is neither real nor useful, and ultimately ruinous to viewers who uncritically embrace it. It seems altogether fitting that McQueen spent a fair part of his screen career behind bars. Over the years, he built himself a lucrative and comfortable onscreen prison, and unlike his characters, he lacked the skills, or the will, to break out.”