Famous For Being Fat

I’m very much at peace with never having listened to a single Jessica Simpson song, including “I Want To Love You Forever.” I didn’t mind her performance in The Dukes of Hazzard, but I didn’t think it was very good either. I really hate conservative-minded entertainers who talk about having conversations with God. Simpson has probably done as much to recruit Taliban followers as Sex and the City or the Charlie’s Angels movies. A lot of us believe that the world would be a better place if she’d never become famous for anything. 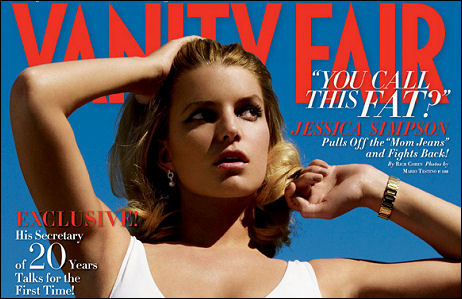 Why has Vanity Fair put her on the cover of its June issue? And run this story about her? And who wrote the copy that says she’s “fighting back against unflattering tabloid portrayals” — i.e., Vanity Fair-speak for the fact that Simpson became fat last year and that people took pictures of her. And who decided to describe the photos in the piece as Simpson “showing off her God-given assets”? The wearing of dresses is showing off assets?