I arrived yesterday morning at the Cannes train station well ahead of my 10:29 am train to Montpellier, which would arrive three and a half or four hours hence. An hour or so later my Barcelona train would depart and put me on the streets of Woody Allen‘s favorite Spanish city by mid-evening. All worked out, standing on the right voiture, everything in order — what could go wrong? 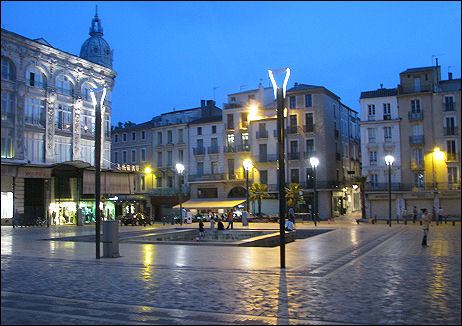 At 10:23 am a westbound double-decker train pulled up and stopped. People got off and on. My French being in the same pathetic state it’s been for several years, I didn’t comprehend the announcement that informed French-speaking travelers where this train was headed. I only knew that in the States it’s normal for a train departing at 10:29 am to pull up a few minutes earlier to allow people plenty of time to get off and get on, etc. So I got on.

Excerpt the train left at 10:25 am, and trains never leave before their scheduled departure time. An awful stomach-acid feeling kicked in. But I’ll be okay, I told myself. As long as the train stays on a westerly course and hugs the coast and stops in Marseilles, I could just get off in Marseilles and jump on the correct train – i.e., the one that I presumed was about four minutes behind. Five minutes later I pulled out the iPhone, checked the GPS map and realized that my train was heading north by northwest, towards Grasse and other municipal metaphors for hell.

That was it, dead meat. No Marseilles or Montpellier on this route, and with all the backtracking I’d have to do I’d almost surely miss the 4:17 pm Montpellier-to-Barcelona train, which was the last train from Boot Hill that day. Unless…

I got off at the next stop and called a cab. My wild-eyed plan, I told the driver, was to catch the train I’d missed, possibly in Marseilles. But that idea died a pauper’s death when he told me it would cost 350 to 400 euros to drive to Marseilles. So I asked to be taken to le Gare de Nice, which cost me 70 effin’ euros. I went up to the SNF ticket window and was told that for the sin of missing my train my Cannes-to-Montpellier ticket had been devalued by 50%. So I bought a new ticket to Narbonne, about an hour north of the Spanish border and a little bit closer than Montpellier. My new tickets, penalties included cost me about 75 euros.