I just got back from a 7:45 pm show of Kirby Dick’s Outrage! at the Clearview Chelsea plex on 23rd Street. Two tickets cost me $25 bills, which I didn’t like at all. Why didn’t they charge $15 a pop? And then I noticed maybe 30 people in the theatre. Chelsea is a gay neighborhood and the locals can’t be bothered to patronize one of the strongest and toughest films about the Washington realpolitik and the denial of gay civil rights? What are they doing, sipping Chardonnay and looking for action? 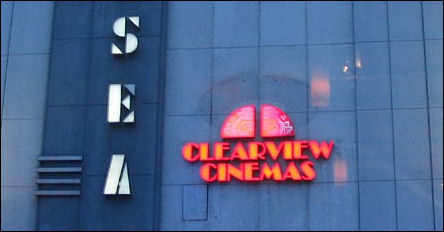 And then the trailers start and they look like dogshit — washed-out, pixellated, pathetic. This is because they’re being projected off a DVD with some kind of low-rent DVD projection player. And then Outrage! starts and it looks just as bad. I’d seen it initially at a Tribeca Film Festival screening at the School of Visual Arts theatre on 23rd Street (i.e., about a block west of the Clearview) and it looked much sharper, crisper, cleaner.

This is bullshit, I tell myself. I paid $25 for two tickets and the best the Clearview can do is pop a screener into their P.C. Richards DVD projection player and make Outrage! look awful? I paid money to see this? I could have asked Jeff Hill for a screener and watched it on my 42″ plasma and it would have looked just fine. What a rip.