Bar Refaeli is an Israeli model who’s primarily known for her relationship with Leonardo DiCaprio. She’s the 2009 cover model of the Sports Illustrated Swimsuit Issue (lah-lah) and is currently on the cover of the new Esquire. What’s the emotional-psychological essence of a guy who always goes for sleek leggy models like Refaeli and the nearly identical Giselle Bundchen? Never a buxom girl-next-door or a Reese Witherspoon maternal type — always a striking greyhound. 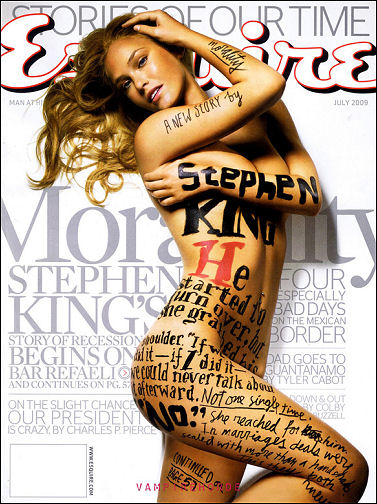 “The big gossip news today is that John Travolta will not be doing publicity for Sony’s upcoming The Taking of Pelham 123. Fair enough. The man lost his sixteen year old son in a freak incident just six months ago, so the idea of doing a junket and/or appearing on the late-night talk shows is probably not very appealing right now (if ever again).

“But here’s the awkward situation. It stands to argue that the news that Travolta is not doing publicity, as revealed by the film’s costar (Denzel Washington), makes for a bigger media splash than if Travolta had just gone out and done the traditional publicity tour. Surely if his son had not just died, the footage of Travolta doing this appearance or that appearance wouldn’t be the least bit noteworthy.

“Furthermore, if Travolta had gone the publicity route, having just suffered said family tragedy, each appearance and each interview would have been front-page fodder for the gossip rags and gossipy news sites. Either he opens up about his grief and every quote becomes a ‘must-read heartbreaker’, or he completely focuses on the film, which then is a news story in and of itself (‘Why won’t he talk about it? Is he in denial?’ the tabloids will scream).

“Point being, from a purely objective point of view, can we not conclude that the death of Jett Travolta is actually a boon for Sony marketing and those who desire that The Taking Of Pelham 123 open well in two weeks? Just as the death of Health Ledger and the prostitution-related arrest of Hugh Grant have an added boost to their respective projects,

“John Travolta’s family tragedy will have the effect of turning an arbitrary publicity tour (by Washington and others involved in the film) into a genuine news story that will place the film in the fore minds of readers and viewers everywhere. Sad to say, but the death of Travolta’s son is nothing but good news for the financial success of his latest picture.” (Thanks to Movieline‘s Kyle Buchanan for the heads-up.)

Michael Moore‘s 6.1 rant about how General Motors systematically destroyed itself and decimated the lives of thousands of its employees is well taken and pretty much indisputable. But his suggestions about what should be done now are very wise and forward-thinking. 1. President Obama “must tell the nation that we are at war and we must immediately convert our auto factories to factories that build mass transit vehicles and alternative energy devices.” 2. “Don’t put another $30 billion into the coffers of GM to build cars [but] use that money to keep the current workforce — and most of those who have been laid off — employed so that they can build the new modes of 21st century transportation.” 3. “Announce that we will have bullet trains criss-crossing this country in the next five years “and hire the unemployed to build the new high-speed lines all over the country.” And so on. Worth reading.

Listen carefully to what Craig T. Nelson is saying to Glenn Beck, apart from his “seriously thinking” about not paying his taxes due to a lack of government accountability. If he’s asking what happened to the first ton of bailout money (i.e., the amount that Congress approved last fall), he’s not being unreasonable. Tyson director James Toback said a similar thing (“Where did it go?”) during our interview last April. But I’m not sure Nelson is saying exactly that.

Here‘s the AP story, but it’s all in the video clip.

I don’t understand the ecstatic notices for Sam Raimi‘s Drag Me To Hell , which I saw late yesterday afternoon. It’s a stunningly sloppy and low-rent thing. There was reason to expect that Raimi would apply at least some of the focus and finesse that he showed in A Simple Plan and in portions of the Spider-Man films, but this is a shoddy and unintelligent wankoff from start to finish.

The story and human behavior are so contrived, hackneyed and illogical that all you can do is throw up your hands and say “what is this?” I understand the deal with intentionally ludicrous horror films — the rules of reality don’t apply, go with the attitudinal flow, etc. — but a filmmaker who flaunts style and tricksterism over all other factors, as Raimi does here, is going to have to lay it out with me.

Drag is supposed to be a semi-humorous wallow — I get that. Raimi’s recapturing of an Evil Dead low-budget sensibility, showing us (and himself) that he hasn’t lost that crudely feverish push-the-frenzy quality. But Drag Me To Hell isn’t remotely digestible on any level. It’s ludicrous, absurd. Even the vaguely yellowish color photography is irksome. (It reminded me of the color tones in the various Airport films.)

The core problem is that none of the nightmare agonies experienced by Alison Lohman‘s bank-loan officer are morally justified. She declines to approve a home mortgage loan because the applicant — a diseased old crone — has a bad credit history, having failed to keep up with timely payments on two previous loans. (Or something along those lines.) Isn’t that what a responsible loan officer should do? She isn’t particularly manipulative or greedy or scheming. She’s just a nice dull girl living in a house she can’t afford.

As Village Voice critic Nick Pinkerton writes, Drag Me To Hell doesn’t present “a particularly nuanced moral vision. Does Raimi — who began his career on a shoestring in the Tennessee woods and now commands $300 million bonanzas — actually believe professional ambition should be punished with eternal damnation?” 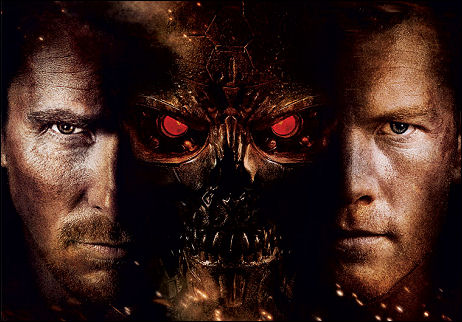 European jet lag always throws you off for two or three days. It plays hell with concentration. The guys and I went to a double-header yesterday at Leows’ 84th Street — Terminator Salvation and Drag Me To Hell. We got back home in the early evening and I immediately went online, but all I could do was surf like a zombie. And an hour from now I have to drive Dylan and his stuff to Philadelphia, where he’s enrolled in the University fo the Arts and where he’ll be working and living thissummer Out of commission until sometime this evening. 5:25 pm Update: Heading back from Philly as I speak, filing from a moving car.

This CNN deer-jumping video summons a traumatic event that I’ve been suppressing for the last nine days. I was driving my rental car on a dark country road in Denia, the Spanish port town located a half-hour south of Valencia, around 10 pm or so, and going about 30 or 35 kph when I suddenly hit a dog. A smallish mutt ran right in front of me….whump. He/she was chasing a dark cat, which had run in front of the car a split second earlier. There was no time to stop. Over before I had a chance to react.

The dog wasn’t killed — it ran down the road and into the brush three or four seconds later — but you know how adrenaline works. Howling and crying, obviously badly hurt. There was nothing to do or say, but every time my mind flashed on it over the remainder of the Spain trip I shuddered. The accidental, blame-free, unavoidable nature doesn’t matter. The fact of an animal suffering because of something I did, however unwittingly…

We all feel awful over the hurtful things we’ve done, whether they were our fault or not. I’ll never get over my having beaten a turtle when I was seven or eight with a heavy stick and causing its shell to bleed. I’d had a nightmare about being bitten by a snapping turtle and I thought that the turtle I ran into might be a dangerous cousin of some kind. A stupid little-kid thing to have done, but I’ve never forgotten it or gotten over it.