Support on Patreon Follow @wellshwood
17 Comments
Off With His Head

“Security officials and riot police engaged in violent clashes with demonstrators in Tehran today in what one reporter called an ‘unprecedented scene’ in Iran in recent years,” reports a HuffPost account. “NBC producer Ali Arouzi described the events on Saturday: ‘What started off as a small rally outside a pro-reformist newspaper swelled into a massive crowd of people chanting, ‘Death to the dictator, death to Ahmadinejad!’

Many or most pre-election polls favored pro-reform candidate Mir Hossein Mousavi, President Ahmadinejad‘s opponent who leads a powerful youth-driven movement, to win the election by a healthy margin. The general worldwide belief in every corner of the universe is that Ahmadinejad flat-out stole the election.

“A small amount of police pushing the crowd back turned into huge riot police in armored gear and motor bikes beating all the young students here with batons, knocking them back. The students responded by throwing stones, which the police then threw back. Now the police are coming off all the heart streets and main streets to try and disperse the crowd.”

Several injuries were reported after police officers hit protesters with batons. Witnesses said some demonstrators appeared to have been arrested. Black-clad police also gathered around key government buildings and mobile phone text messaging was blocked in an apparent attempt to stifle one of the main communication tools by Mousavi’s movement.

Mousavi “urged his supporters to resist a “governance of lie and dictatorship.’

“Secretary of State Hillary Clinton said Saturday that the United States hopes the outcome of Iran’s election reflects the “genuine will and desire” of its people, and that she will continue to monitor events as they unfold.Ahmadinejad has the apparent backing of the ruling theocracy, which holds near-total power and would have the ability to put the election results into a temporary limbo.

Mousavi “had not made a public address or issued messages since declaring himself the true victor moments after polls closed and accusing authorities of ‘manipulating’ the vote.

“‘I’m warning that I won’t surrender to this manipulation,” Mousavi said through on the web today. “The outcome of what we’ve seen from the performance of officials…is nothing but shaking the pillars of the Islamic Republic of Iran sacred system and governance of lie and dictatorship.'”

DVD Beaver frame capture from Universal Home Video’s Field of Dreams Blu-ray, which apparently is somewhere between okay and so-so looking. “More grain is visible and the hi-def visuals definitely export a texture that is not present in the DVD releases,” writes Gary Tooze. But I love the ebbing twilight atmosphere in this still. So few films have been willing to run with poetic concepts. 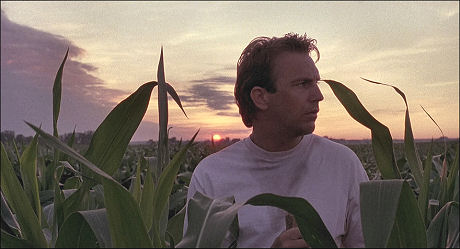 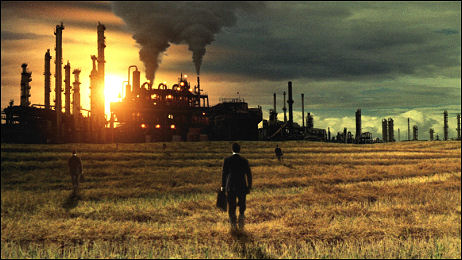 The trailer for I Love You, Beth Cooper (Fox Atomic, 7.10) suggests that the film is coarse and vulgar and way overcranked. A ludicrous teenaged horndog wish-fulfillment plot, gross stupidity, a hissing raccoon, insanely overdone foley effects, every cliche out of the tits-and-zits high-school handbook. Truly repellent. An unfortunate comedown for Chris Columbus, whom I was starting to learn to like after the invigorating Rent. The screenplay is by Larry Doyle, based on his book. I mean, I wanted to throw up.

Last night around 6:45 pm I walked into Leows Lincoln Square and a mid-sized theatre playing The Hangover to see the Michael Moore teaser. Except I made the mistake of sitting behind an ugly bald guy whose seat was leaning way back, in the same way that thoughtless people in coach lean their seats right into your face. He was short and bald and rocking in his seat as he stuffed his face with popcorn. It was like sitting behind a rambunctious seven year-old. I hated him on sight.

After the fifth or sixth turn-around I said, “What…? What’s your problem?” He said I was breathing on his head and it bothered him. Nostril breath, he meant. “Well, you’re gonna have to deal with it, pal, because I’m not gonna stop breathing,” I said. “You wanna sit on my lap?” he said. No, I said, and why don’t you try just sucking it in and shutting the fuck up? “Just go…just get outta here,” he said. “I’m not going anywhere,” I said. “Find a way to live with it.”

But I didn’t want to be anywhere near this monkey so I looked around and noticed two vacant seats behind me, on either side of a pretty 20something girl. No clothing or markers on either seat so I got up and sat in the empty aisle seat. Beat, beat, beat. “This seat is saved for my boyfriend,” she said. “Oh, for God’s sake!,” I said as I got up. “I don’t know why you’d be mad at me,” she said. “Because if you’re saving a seat you mark it,” I said. “You lay…you know, lay a jacket or a handkerchief or a folded newspaper on it. As in basic jungle law?” She looked at me quizzically. “Like wolves marking territory with urine?” Nope, no clue, pointless.

After seeing the Moore teaser and watching the kids walk around with donation cups (the girl behind me who saved her boyfriend’s seat reached into her wallet and gave a dollar to “Save Our CEOs” — brilliant) and listen to a guy yell out “start the movie!,” Jett and I walked over to the Taking of Pelham 1 2 3 theatre for a 7:15 pm show.

They showed the Moore teaser again. We were going to sit somewhere in the fifth row but a 20something animal in shorts had his big ugly bare feet sticking through from his seat an aisle back. “I don’t wanna sit next to that guy’s feet,” Jett said. I looked over and felt contorted with digust. “What an animal,” I said to Jett. “Look at him.”

Then the trailers started playing, seven or eight of them. Deeply depressing, assaultive. I felt nausea after watching the trailer for I Love You Beth Cooper. Then a baby started crying about a half-hour into the film.

Steve Mason’s weekend projection says that The Hangover will win again and that Pelham will come in third with $26 million or so. The Lincoln Square was showing The Taking of Pelham 1 2 3 in their best and biggest theatre and The Hangover in a slightly smaller and shittier house — a large underventilated shoebox. The Hangover theatre was packed to the rafters, and the Pelham theatre was maybe 80%, 85% full. But a lot of people applauded at the end of it.

“This clever and inventive tale works on three levels: as an intriguing science fiction concept, a realistic character study and a touching love story. Henry De Tamble (Bana) is a Chicago librarian with ‘Chrono Displacement’ disorder; at random times, he suddenly disappears without warning and finds himself in the past or future, usually at a time or place of importance in his life. This leads to some wonderful paradoxes.

“From his point of view, he first met his wife, Clare (McAdams), when he was 28 and she was 20. She ran up to him exclaiming that she’d known him all her life. He, however, had never seen her before. But when he reaches his 40s, already married to Clare, he suddenly finds himself time travelling to Clare’s childhood and meeting her as a 6-year-old.

“The book alternates between Henry and Clare’s points of view, and so does the narration. [It] expresses the longing of the one always left behind, the frustrations of their unusual lifestyle, and above all, her overriding love for Henry. Likewise, [it] evokes the fear of a man who never knows where or when he’ll turn up, and his gratitude at having Clare, whose love is his anchor.”

The German-born Schwentke is best known for having directed Flightplan, the Jodie Foster thriller.