HE humbly and wholeheartedly agrees with New York’s Vulture squad that Tom Cruise would be the best guy to replace Sean Penn-as-Larry in the Farrellys’ Three Stooges movie. God, what a beautiful idea! I read this a couple of hours ago and have been in the best mood since. 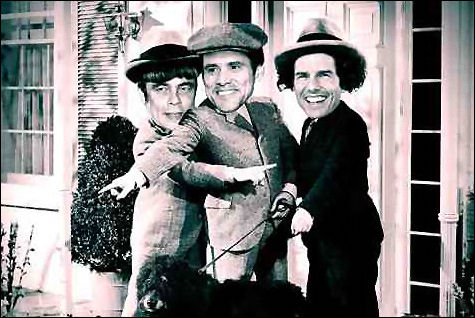 The new trailer for Roland Emmerich‘s 2012 trailer promises a slightly more ferocious rehash of other doomsday movies. Here and there I felt the lingering ghosts of Armageddon, The Day After Tomorrow, Deep Impact, etc. It’s a miracle that all those meteorites (or whatever they are) manage to miss the SUV carrying John “paycheck” Cusack and his son. I’m bored. Emmerich is bored. We’re all bored.

If I was running the Public Enemies p.r./marketing effort, I would give the okay to one or two select journos who admire Michael Mann‘s film to post retorts to Lou Lumenick’s now-redacted pan. I’ve heard from one guy who says Lumenick is “so wrong in so many ways” about the film. There’s also Kris Tapley‘s claim that PE is Mann’s best since The Insider. Get in front of it, slap it down — don’t let Lou control the conversation. Mann loyalists, unite!

Last night’s Century City screening of Harold Ramis‘s Year One was so empty and unfunny that I decided to catch a little shuteye. I’d been up since 2:30 am LA time and it wasn’t like I was missing anything. How could the director and cowriter of the inspired Groundhog Day, easily one of the most satisfyingly made and richly themed comedies of all time, have allowed himself to make something as lame and sloppy as this? The current 28% Rotten Tomatoes rating is no surprise. It’s brazenly awful. 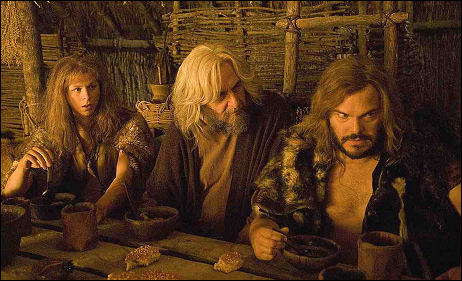 Some are comparing Michael Cera and Jack Black‘s comic attitude and repartee to that of Bud Abbott and Lou Costello, but the craft that went into the old black-and-white Abbott and Costello comedies of the ’40 sand ’50s puts a piece of shit like Year One to shame. I’m not referring to first-rate A&C films like Buck Privates and Hold That Ghost — I mean the second-tier genre-spoof stuff they started making in the late ’40s (Abbott & Costello Meet Frankenstein, etc.). They were mostly mediocre but at least watchable for that old-studio rigor and professionalism, which is more than you can say for this turdblossom. The idea that professionals made it — guys who get paid millions to write and act funny — keeps failing to compute.

It’s almost as if Ramis and Black and Cera got together and said, “We need to make a movie that will take all three of us down and sully our reputations. We don’t want just a blemish — we want lifelong friends who’ve seen it to cross to the other side of Montana Ave. when they see us coming. Now, how do we do this?” In this sense, Year One is a success.

Joel and Ethan Coen‘s A Serious Man (Focus Features, 10.2) has been rated R or “language, some sexuality/nudity and brief violence.” I could have foreseen this, I suppose, if I’d simply read the script, which I’ve had for months. But that would have required focus and discipline.

Almost everything I’m posting this morning is a day late and a dollar short due to yesterday’s travel, but the 6.17 Tootsie-like tale, conveyed in Seth Abramovitch‘s Movieline interview of The Proposal‘s Peter Chiarelli, is quite funny.

“So get this pitch: A young, handsome Hollywood executive has some spare time on his hands, so he writes a script — a romcom. And because this is a small town and he wants it to be judged on its own merits, he puts the name ‘Jennifer Kirby‘ on the front page. The script makes the rounds, people love it, and everyone wants a general meeting with this Kirby girl. So our hero gets his best friend to do him over in drag, heads out into the unforgiving L.A. sunshine, and not long after that the macho head of a studio falls for the script…and for him.

“It’s Tootsie for a new generation, right? And right when you have the suit sipping a Diet Coke on the other side of the desk, hooked, that’s when you reel him in with those five magic words: Based on a true story.”

Few lay things down as plainly and forcefully as the great Cenk Uygur. “If you allow Khamenei to remain as the supreme leader and Ahmadinejad to be the president it’ll be tremendous wasted opportunity and they’ll only crush you further as time progresses…they will slowly arrest all the leaders….they have now announced that they are a dictatorship….right now, are you going to allow a dictatorship in Iran or do you want a voice in your own government?”

“It so happens that The Hurt Locker takes place in Iraq,” writes Entertainment Weekly‘s Lisa Schwarzbaum, “but geography is almost beside the point. What makes the film so essential is its pinpoint accuracy in mapping the disorienting roads a man can walk down when ?his job keeps him so close to death, working for what sometimes feels like a distant principle.

“Director Kathryn Bigelow and journalist-screenwriter Mark Boal (whose blunt, vivid script is based on reports from his 2004 stint in Baghdad embedded with an Army bomb squad) probe the intersection of bravery and obsession, of risk and responsibility. (Guy Pearce and Ralph ?Fiennes make brief, jolting cameo appearances as ?similar risk-takers.) The result is an intense, action-driven war pic, a muscular, efficient standout that ?simultaneously conveys the feeling of combat from within as well as what it looks like on the ground.

“This ain’t no war videogame, no flashy, cinematic art piece; there’s nothing virtual about this reality.”

Over the next six days I’m down for at least nine films at the Los Angeles Film Festival, including Michael Mann‘s Public Enemies (which showed to a crowd last night in Manhattan) next Tuesday evening, Cyrus Nowrasteh‘s Iran-set The Stoning of Soraya M., Davis Guggenheim‘s It Might Get Loud and Robert Siegel‘s Big Fan. 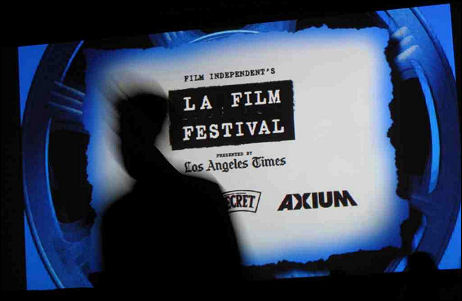 The day before Public Enemies there’s a Hurt Locker all-media, which I’ll be attending for reasons of pure enjoyment (jolt cola cinema gets me every time) and because I want a friend to see it.

Nobody I’ve spoken to has seen or heard much about Michele Mulroney and Kieran Mulroney‘s Paper Man, the opening-nighter that starts at 7:30 pm (i.e., twelve hours from now). Costarring Jeff Daniels, Ryan Reynolds, Emma Stone, Kieran Culkin, Hunter Parrish and Lisa Kudrow, and described as a coming-of-middle-age story concerning Daniel’s character, a married writer who nurtures a suoperhero fantasy. “Coming” of middle age? Daniels, no offense, is well into that.

I’ve missed opportunity after opportunity to catch screenings of the The Stoning of Soraya M. (Mpower, 6.26) in Manhattan. But it’ll be showing here on Saturday so I’ve caught a break.

I’m vaguely interested in catching the world premiere of Brent Meeske‘s Branson, a doc about aspiring country-music performers. The challenge, of course, will be to suppress my feelings about red-staters. I respect the social verite inspirations behind country music, but so much of it is about breakups and broken hearts, boredom and booze, ignorance and rodeos and so on. Robert Altman‘s Nashville didn’t present this problem because he made roundabout fun of the country music scene and the locals through it.