Support on Patreon Follow @wellshwood
9 Comments
All For Now

It’s one of those late-filing days with too much to do and not enough hours. I now have to move my bags to another place and then see 500 Days of Summer at 5 pm and then attend an LA Film Festival party. But what is all this running around town compared to the terrible coming fate of Iran’s green opposition forces? Awful news.

Kieran and Michele Mulroney‘s Paper Man, which kicked off the Los Angeles Film Festival last night, is, at best, a qualified dud. People were too polite to groan or whimper or walk out (even I stayed for the whole thing) but this was a film determined to just loll around and talk about loss and lament and enervate the living shit out of the audience at any cost. The atmosphere in the theatre (and I’m not exaggerating) was one of terrible suppressed calamity. 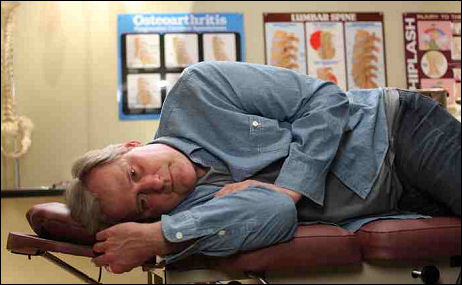 “Is this really happening?” I said to myself about 40 minutes in. I was exhaling and beginning to question the fundamentals. “They chose this movie to open the festival? A film this flat and meandering and borderline amateurish at times? Why…?”

LAFF director Rebecca Yeldham, I’m told, didn’t want to open the LAFF with Taking Woodstock or some other Cannes Film Festival selection that had already been seen and worked over. She wanted a farm-fresh entry. She actually said to Variety‘s Anne Thompson that she “wanted to find a film that reflected the spectrum of great movies in our contemporary film culture.”

And so naturally she chose an obviously problematic, low-energy, dialogue-driven indie-downhead drama that no one (and I mean no one with any practical financial sense) will ever acquire for distribution, barring suicidal instincts. But of course!

Paper Man is about a failed mid-50ish writer (Jeff Daniels) who, unable to deal with just about everything, least of all a new book he’s under pressure to deliver, sits around a yellow Montauk cottage that he and his surgeon wife (Lisa Kudrow) have rented, and goes on fantasy trips. He mainly tries to think and feel and behave like a kid so as to…I don’t know or care what his adolescence obsession is about, and neither does anyone else for the longest time. But it’s basically a case of serious writer’s block, chronic maturity issues, woe is me, why doncha kill me, etc.?

Guys in their mid 50s with adolescent behavior issues are deeply unappealing. You can’t be this pudgy and puffy-faced and this fucked up and expect an audience to empathize. It’s just not in the cards.

The story is mainly about Daniels’ non-romantic friendship with Emma Stone, who plays a local teen. She has two emotional exposure scenes — this is who I am, what I’m dealing with, what my hurt is about — and I’m sorry but she overplays it. There’s nothing worse than an actor pretending to suppress tearful emotion and losing the battle. Always win, always suppress. Let the audience feel what you’re feeling — never show it.

Paper Man‘s biggest problem is Daniels’ imaginary superhero friend, Captain Excellent (Ryan Reynolds), who pops in every eight or nine minutes in a blue and red Superman-type getup to advise or goad Daniels about this or that decision or behavioral issue, or to try and help with his writing. The metaphor is immediately tiresome — I was sick of it before the film started — and Reynolds is a bother every step of the way. The movie would’ve been 20% better off if they’d tossed him altogether and just focused on Daniels, Stone and Kudrow.

Another good thing would have been if someone (a lesser character, an extra, anyone) had come up behind Keiran Culkin‘s character, a morose gloom-head who does nothing for the entire film but stare at Stone and profess his love for her, and shot him in the head.

Besides being an actor, Kieran Mulroney is the younger brother of Dermot Mulroney. (His IMDB page notes that he’s “the ex-brother-in-law of Catherine Keener.”) Neither he nor wife Michele Mulroney have directed a film before.