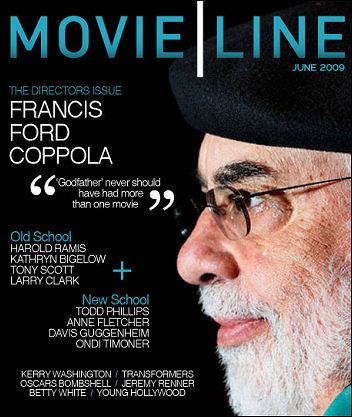 Let me get this straight. England’s Optimum Home Entertainment is bringing out Bluray versions of both parts of Steven Soderbergh‘s Che two days from now and Criterion still hasn’t officially announced they’ll be putting out their own Che Blurays sometime in the fall? They’re still playing the cartoon hinting game? Why is Criterion so slow and Optimum so fast? That’s it — I’m getting a multi-region player. 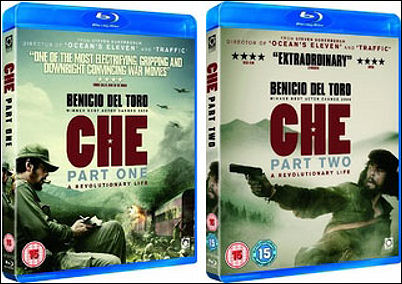 And no excuses about how Criterion needs more time because they always put together a great package. When another region commercially releases a Bluray title that I’ve been looking forward to several months before the U.S., I feel jealous and resentful. We live in a now/sooner/ADD world. We don’t live in a world that goes by the words “chill down,” “eventually,” “read a book” and “never sell a wine before its time.” 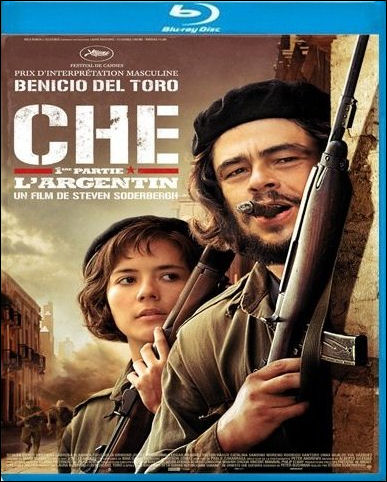 I’m among a small group of Hurt Locker-admiring journalists who’ve been asked to do short before-the-audience interviews with director Kathryn Bigelow (and, I gather, producer/screenwriter Mark Boal) prior to evening showings at lower Manhattan’s Sunshine Cinemas. (Coming Soon‘s Ed Douglas did one last night.) My chit-chat will start just prior to tonight’s 7:10 pm show. The Sunshine website says Bigelow will also make an appearance prior to the 9 pm show so I guess another journalist will be doing the honors. It’s a daisy chain. 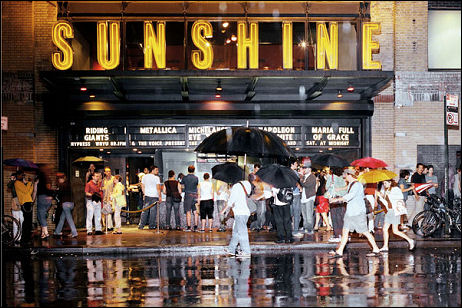 Asked by GQ‘s Alex Pappademas about alleged pressure upon Quentin Tarantino to significantly trim Inglourious Basterds (the Wrap‘s Sharon Waxman reported that the film might conceivably lose as much as 40 minutes), Harvey Weinstein responds with emphatic denials — “this is nuts,” Quentin “won’t cut,” “I don’t think it’s going to be shorter,” etc. And then he says that the film actually will be cut down somewhat.

“Those stories are all untrue,” Harvey says. “There’s no fucking way. Here, read my lips: That is nuts. Please don’t even write that — it’s insanity. There’s not even a question of that. Whatever you’re reading, it’s like some insane blogger. There’s no truth to any of this. He’s not gonna cut.

“What he’s doing is just reorganizing some scenes. I mean, the guy had six weeks to cut his movie [for Cannes]; most guys take six months. Most guys take a year. When I worked with Martin [Scorsese], we’d do eighteen months in post-production. Quentin Tarantino cuts a movie in six weeks? Come on, there’s shit on that cutting-room floor that’ll blow your brains out. I was telling Quentin the opposite — ‘You should put that shit back in the movie.’ There’s scenes with Brad Pitt and the Basterds, and I’m praying he puts that shit back in, ’cause it’s un-fucking-believably great.

Variety‘s Todd McCarthy and the Hollywood Reporter‘s Kirk Honeycutt both reported in their reviews that the running time was two hours and 32 minutes. So what Harvey is really saying is that apart from whatever Tarantino is considering regarding additions and re-shufflings, the final running time will be either five or twelve minutes shorter than what was shown in Cannes.

Weinstein also tells Pappademas that Tarantino long ago wrote a sprawling Band of Brothers-like Basterds storyline that goes way beyond what’s in the film, and that there’s current interest on his and Tarantino’s part to shoot a Basterds prequel.

“We weren’t even gonna do it as a movie!” he says. “We were gonna do this as, like, 16 hours for Showtime or HBO. He had so much stuff mapped out, we could have done like 3 movies. It was just epic. We could do two movies, three movies. I was begging for the movies, but Quentin wanted to do the TV series, Bob [Weinstein] wanted to do the TV series, so it was like two against one, you know? And I was getting outvoted all over the place, so I just figured, ‘All right, forget it, I’m not gonna be a loser, I’ll jump to the winning side.’ And then Quentin turns it into one movie. Go figure.” 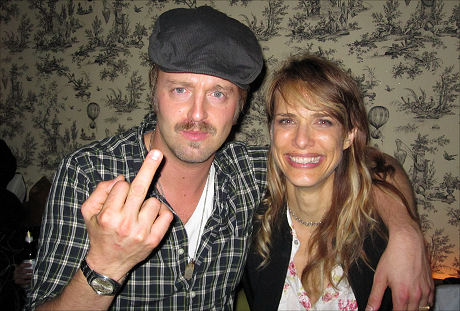 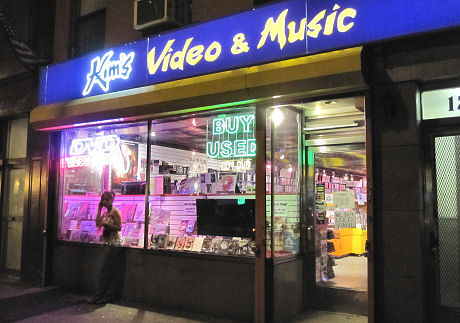 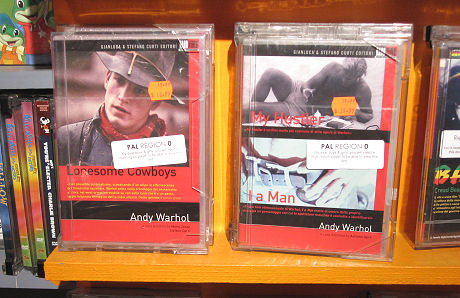 I love how the mustard shelves enhance the salmon-red DVD jackets and vice versa. And how Kims puts gay-themed Warhol/Morrissey/Dallessandro movies from the late ’60s and early ’70s right next to the kiddie/family section. 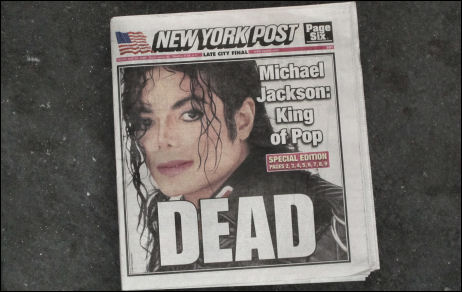 Telegraph music critic Neil McCormick yesterday posted the best written and most bluntly honest reaction to Michael Jackson‘s life and passing that I’ve read thus far. Wait for dusk, take the IRT down to Astor Place, walk over to First Avenue and find a clean car to lean against, take out your iPhone or Blackberry and read it that way. Trust me.

“‘This is it, this really is it,’ announced Michael Jackson in his last official public appearance, at the O2 centre on March 5th, 2009. He could have had no idea how true that phrase would turn out to be. The self-styled King of Pop is dead. There was to be no triumphant comeback just a final bizarre twist in pop’s strangest soap opera.

“And that is what Michael Jackson’s existence had long since turned into, a particularly weird real life melodrama, played out in tabloid newspapers, gossip magazines, TV inquisitions and a succession of court rooms.

“It was a story of a prolonged and ugly fall from grace told in whispers and innuendo, but all too rarely (sadly) in song. It was eight years since he made a record, and probably twenty since he made a good one.

“Jackson rose like a showbusiness meteorite from much loved child star to the greatest pop icon of his time, but once installed on the throne he craved, he seemed to unravel before our very eyes. He mutilated his appearance in a vain attempt to turn himself into his childhood fantasy hero, Peter Pan, the boy who never grew up. He installed himself in a playground that he called Neverland, with monkeys and other animals for company. He entangled himself in inappropriate relationships with young boys.”

Wait…I have to stop here. “Inappropriate”? What’s wrong with diseased and predatory?

“He married and divorced Elvis Presley’s daughter. He acquired children through some surrogate shenanigans with his nurse. His nose apparently fell off. He blew an astonishing amount of money and wound up an itinerant superstar, pursued through the courts by creditors and sheiks baying that he owed them millions of dollars.

“Neverland closed its gates. His belongings were exhibited for auction, including such prize items as an actual throne and an oil portrait of Jackson as a fairy tale ruler. He grew skinnier and paler (quite something for a black man) and apparently explored every possible avenue to return to the limelight without actually having to perform live.

“And then he surrendered to the inevitable and announced his return to the stage. Only even then, he seemed to be simultaneously announcing his retirement, telling us it would be the last time we would ever see him, in London at least. Or the last 50 times. ‘This,’ he kept repeating like a mantra he didn’t even believe himself, ‘is it.’

“I was asked last week by the LA Times why I thought Michael Jackson was staging his comeback in the UK rather than the US. ‘Are the British more forgiving?’ the journalist wanted to know. My off-the-cuff reply was that because we watched the whole Jackson saga unfold across the Atlantic, tuning into scenes from LA on our home screens, we always treated it as a kind of fantastic Hollywood soap that said as much about America as it did about Jackson himself. And ultimately it didn’t really matter to us whether his comeback was a triumph or failure, we just wanted to catch the next episode.

“Well, this is it, this is really it. The final twist turns out to have been both impossible to predict, yet strangely anti-climactic, as our hero (or villain) shuffles off the world’s stage, not with a bang, but in an ambulance, to die behind closed doors, out of the public eye.

“I wanted to believe, against all the odds, that this rather lost and bewildered fifty year old superhasbeen was going to stage one last rally, that he had it in him to reconnect with his extraordinary talent. I tried to convince myself he was a showbiz trouper and that the call of the footlights, the impatient rustle of the audience gathering beyond the curtain, would somehow snap him out of his lethargic, disassociative state, and that he would rise to the occasion.

“But his behaviour at his press conference suggested otherwise. And rumours from LA grew steadily worse, as he failed to turn up to rehearsals, appeared at a dermatology clinic carrying a bag labelled ‘skin cancer’ (which seemed to be more of a photo op than an actual health complaint) and then postponed his opening shows for the vaguest of reasons.

“As famous last words go, ‘This is it’ has a certain iconic ring to it, but Michael Jackson’s final recorded public utterances are actually less edifying and a great deal more disturbing. ‘I don’t know how I’m going to do fifty shows. I’m not a big eater — I need to put some weight on,’ Jackson whined to fans gathered outside the rehearsal studio.

“So did the concert promoters do for Michael Jackson? They certainly have some questions to answer. It is pretty clear that he was, in some respects, a reluctant participant, driven back to the stage as a last resort to pay off overwhelming debts, whatever promoter Randy Phillips, head of AEG Live, has said about Jackson wanting to do it for his kids, while he still could.

“Dismissing rumours of Jackson’s frailty and ill health, Phillips declared on 21st May: ‘I would trade my body for his tomorrow. He’s in fantastic shape.’ I think this particular medical expert will probably be trying to keep a low profile for a while.

“The death of someone so famous shakes us to the core, because it is like a death in the family. Love him or loathe him, Michael Jackson was part of the fabric of all our lives. Or maybe worse, it is like the death of a God, a sudden unexplainable absence in the mythos of the times. President Kennedy, Elvis Presley, John Lennon, Lady Diana: these are the kind of deaths that confront us with our own mortality, the realization that the end is unavoidable, death stalks us all, no matter how anointed by the fates.

“Such a death is usually greeted with a kind of incredulity. But this is it. This is really it.”