The forthcoming 45th anniversary Dr. Strangelove Bluray (Sony Home Video, 6.16) is more than a visual disappointment — it’s a flat-out burn. I paid $35 bills for it yesterday afternoon and I’m seething. It’s hands down the worst grainstorm experience since Criterion’s The Third Man because Sony’s preservation and restoration guy Grover Crisp went the monk-purist route in the remastering and retained every last shard of grain in the original film elements. No John Lowry-styled finessing whatsoever. 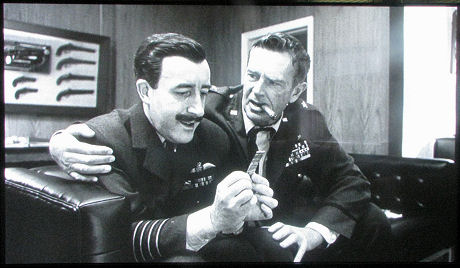 Capture from the new Dr. Strangelove Bluray, out on 6.16. 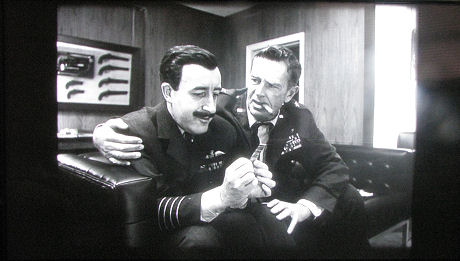 Captured from the 2001 “special edition” DVD.

I understand and respect the fact that Dr. Strangelove (’64) was always intended to look somewhat grainy. I realize that the inside-the-B-52 scenes used source lighting and that the combat footage outside Burpleson Air Force base was supposed to resemble newsreel footage, and these conditions were meant to result in stark and unprettified images. Which is fine. But I’ve been watching this film for decades and the Bluray version is easily the grainiest rendering yet. The grain isn’t just noticable — it’s looks much more explicit.

I’m speaking of an aesthetic concern common to all Bluray discs of older black-and-white films, which is that Bluray masterings and Bluray viewings on any decent-sized plasma or LCD screen (I have a 42-incher) tend to make the untreated natural grain elements in an older monochrome film seem much more vivid and distinct. The result is that this new Bluray version could almost be called a kind of remake. It’s Strangelove reshot in a low-lying Egyptian swamp with Peter Sellers, Sterling Hayden, George C. Scott, Slim Pickens and Keenan Wynn covered in swarms of micro-sized mosquitoes.

For comparison’s sake I popped in my favorite Dr. Strangelove DVD, which is the 2001 “special edition” with the full 1.33 to 1 aspect ratio intact. My Sony Bluray player and 42-inch plasma screen makes this version look a bit grainier than it did on my old 36-inch Sony analog flatscreen, but at least the grain isn’t amplified and underlined like it is on the Bluray, and the alternating 1.33 to a and 1.66 to 1 aspect ratio means you’ve got a taller and fuller (i.e., more aesthetically correct) image to boot. 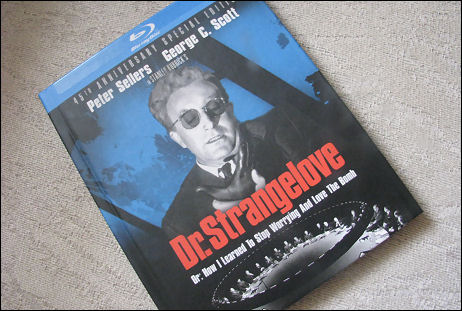 Repeating the rant and caveat emptor — the visual textures contained in the new Strangelove Bluray make it a total visual rip. Do not buy this thing. If you have an old set with a seven-year-old DVD player or a newish plasma or LCD with a Bluray player, buy the 2001 “special edition” Strangelove and stay with it. It obviously doesn’t have the image density that the Bluray version has but you’ll be seeing more of what Stanley Kubrick originally shot and it looks reasonably acceptable in terms of sharpness and monochrome tonal correctness, etc.. And it looks somewhat less grainy and is therefore less problematic. Not a perfect rendering but better than the Bluray.

I obviously haven’t addressed the Bluray extras — the documentaries, the intro section and chaptering graphics, the packaging, etc. All of these elements are fine, entertaining, attractive, stimulating, first-rate.