Alfred Hitchcock made a mystery guest appearance on What’s My Line? in 1954. At the end of his stint some very lascivious dialogue [here‘s an mp3] transpired between himself and host John Daly: 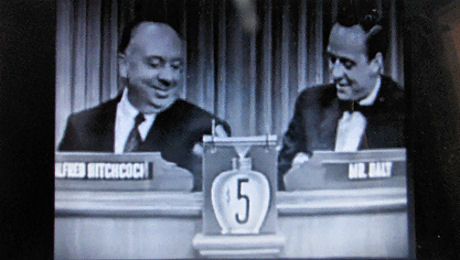 Daly: “With a great many other thousands of people I’ve enjoyed Rear Window and last night I was in Atlantic City and I met miss Grace Kelly, who is one of your stars.”

Hitchcock: “What did you do about it?”

Daly: “Well!….I had my wife and three children along and said it was very nice to meet her and said to Mrs. Daly she’s a very handsome gal.”

Hitchcock: “What a pity.”

That’s Hitchcock for you — decorously lewd to the last, always alluding to the libidinal, etc.