It’s well and good for The Hurt Locker to have Rotten Tomatoes and Metacritic ratings of 98% and 91% respectively, but you know something really special is happening when the notoriously fickle and eccentric N.Y. Press critic Armond White is standing arm-in-arm with the usual elite-critic suspects — i.e., Joe Morgenstern, A.O. Scott, David Denby, David Edelstein, Scott Foundas, Dana Stevens, etc. 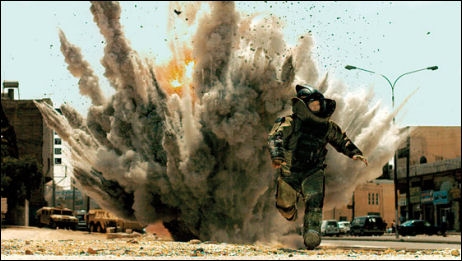 (a) “The Hurt Locker might be the first Iraq-set film to break through to a mass audience because it doesn’t lead with the paralysis of the guilt-ridden Yank. The horror is there, but under the rush.” — Edelstein, New York;

(b) “So far, the best fiction films about the Iraq War are Nick Bloomfield‘s Battle for Haditha, Irwin Winkler‘s Home of the Brave and John Moore‘s allegorical Flight of the Phoenix remake. It’s sufficient praise to say The Hurt Locker joins that short list. Kathryn Bigelow has found her perfect subject.” — White, N.Y. Press.

(c) “The Hurt Locker is a viscerally exciting, adrenaline-soaked tour de force of suspense and surprise, full of explosions and hectic scenes of combat, but it blows a hole in the condescending assumption that such effects are just empty spectacle or mindless noise. If it’s not the best action movie of the summer, I’ll blow up my car.” — Scott, N.Y. Times.

(d) “With her strength of revealing character through action, Bigelow comes closer to the tradition of Anthony Mann, Sam Fuller, and other bygone practitioners of the classic Hollywood war movie than to today’s dominant breed of studio A-listers, who create (mostly incoherent) action at the expense of character. The Hurt Locker is the best American film since Paul Thomas Anderson‘s There Will Be Blood.” — Foundas, Village Voice.

(e) “In this period of antic fragmentation, Bigelow has restored the wholeness of time and space as essentials for action. Occasionally, a plaintive reader writes me a note after I’ve panned some violent fantasy movie and says something like ‘Some of us like explosions. Ease up.’ Well, I like these explosions, because I believe in them. Realism has its thrills, too.” — Denby, New Yorker.

(f) “A first-rate action thriller, a vivid evocation of urban warfare in Iraq, a penetrating study of heroism and a showcase for austere technique, terse writing and a trio of brilliant performances. Most of all, though, The Hurt Locker is an instant classic that demonstrates, in a brutally hot and dusty laboratory setting, how the drug of war hooks its victims and why they can’t kick the habit.” — Morgenstern, Wall Street Journal.

(g) “After The Hurt Locker (which is without question the most exciting and least ideological movie yet made about the war in Iraq), everyone will remember Jeremy Renner‘s name.” — Stevens, Slate.

Cue all the bloated empties out there in middle America. Are we ready? One, two….”we’re not seeing it because we’d rather just be entertained!”