The death of Michael Jackson “forced a last-minute cut to Sacha Baron Cohen‘s Bruno,” according to the Guardian‘s Xan Brooks. As the news of Jackson’s passing broke, a scene in which Cohen interviews the singer’s sister, LaToya “was hastily removed from the film” for last night’s premiere screening, he reports. “Sources at Universal, Bruno‘s distributor, said the decision had been made ‘out of respect for Jackson’s family.'” 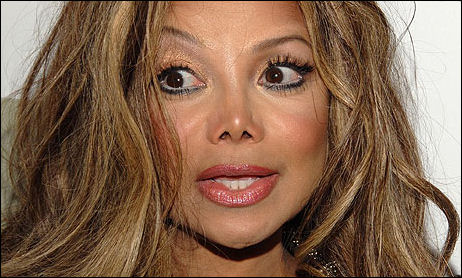 Ten minutes ago I asked Universal publicity if the LaToya footage would be permanently cut. Their response, received at 11 am LA time, was that they “can’t offer comment just yet.”

The offending scene, as Brooks explains, “features Cohen, in the guise of Bruno, attempting to find Michael Jackson’s phone number on LaToya’s BlackBerry. After Bruno reads aloud what he claims to be the singer’s number, an apparently enraged LaToya terminates the interview and storms off the set. Reports suggest that the scene will not be restored for its official release on July 10th.”

I’ve seen the scene and it’s very mild. It doesn’t slag Michael Jackson — it merely pokes fun at his worldwide fame. LaToya is made fun of but who cares about that? I wouldn’t cut it if I were Universal. Stick to your satirical guns, guys! Stand with Sacha and let the Jacksons eat cake. Why be extra-sensitive about a super-popular and super-talented performer who nonetheless became a full-fledged Frankenstein monster who had his way with young boys?