At last night’s Republican fundraiser in Washington, D.C., Jon Voight, who hosted, said he was “embarrassed” by President Obama, that Obama’s leadership would cause the “downfall” of the country,” that “we are becoming a weak nation,” and that Obama is a “false prophet.” It makes me wish I was a big Hollywood producer so I could tell Voight to take a hike…kidding! 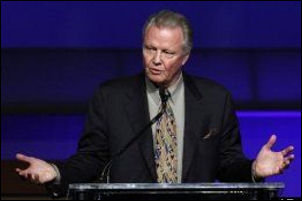 But seriously and honestly, what a grotesque and dedicated demagogue this once-beautiful actor has become. Where does he get this stuff? “Embarassed”?

Remember what he said last summer? That Obama “has grown up with the teaching of very angry, militant white and black people: the Rev. Jeremiah Wright, Louis Farrakhan, William Ayers and Rev. Michael Pfleger? And that “we cannot say we are not affected by teachers who are militant and angry,” and that “we know too well that we become like them, and [that] Mr. Obama will run this country in their mindset.

“The Democratic Party, in its quest for power, has managed a propaganda campaign with subliminal messages, creating a God-like figure in a man who falls short in every way. It seems to me that if Mr. Obama wins the presidential election, then Messrs. Farrakhan, Wright, Ayers and Pfleger will gain power for their need to demoralize this country and help create a socialist America.”

Commenting on Voight’s 7.28 anti-Obama article in the Washington Times, Variety‘s Peter Bart wrote that while he may “appreciate Voight’s fervor,” he worries “about his intellectual equipment.”