“How did you get stahted with this stawrey?,” a junket journalist asked Thirst director Park Chan-Wook early this afternoon. “What was the creativity in makin’ this film?” 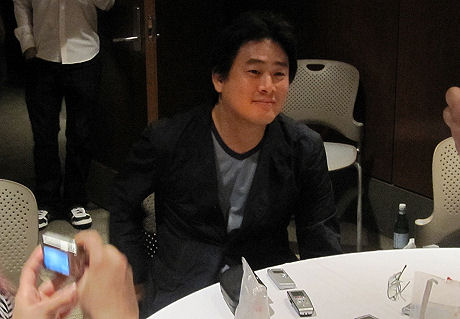 A few seconds later this same journalist asked me not to take photos of Park because she was sitting right next to him and didn’t want her face in the picture. I took a few shots at the get-go because I didn’t want the usual posed-smiling shots. I never thought about including any face-shots of any journalists sitting nearby, but being asked by this woman not to do this tempted me to think otherwise.

I always have these feelings when I attend junket round-tables. I half-pay attention to what the talent is saying about him/herself and the film he/she is promoting while bracing myself for the awful junket questions that are sometimes asked.

Here’s an mp3 of the whole sit-down, which lasted around 35 or 40 minutes.

Based on Emile Zola‘s Therese Raquin, Thirst is a grotesque morality with some extremely hot love scenes. The lovers are a Catholic priest (Song Kang ho) and a repressed housewife (Kim Ok bin). The priest is tortured by his vampirism; the housewife feels liberated by it. I loved the sensual abandon that came out of Kim’s performance, but felt a little dragged down by Song’s moral writhing. 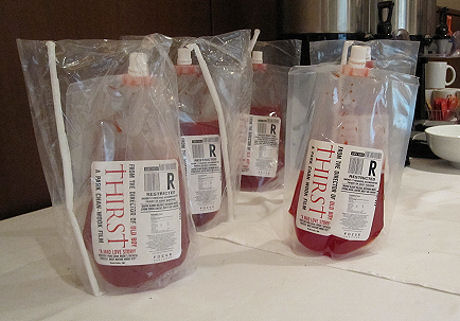 Here’s how I put my question to him, and here’s how he answered through his translator..

Except no one today believes that people suffer absolute damnation and death for their sins. People who’ve done something “bad” or criminal rarely pay the price. If they pay the price they get past it and move on. They atone and compartmentalize and reinvent themselves and write a book or star in a reality show or become born-again Christians in prison. There’s a world of difference between the emotionally propelled vampires in Twilight and the guilty priest vampire in Thirst.