This morning’s New Moon/Comic-Con press conference began at 9:54 am — almost a half-hour late — inside a super-sized meeting hall within San Diego’s Bayfront Hilton. The film’s three stars — Kristen Stewart, Robert Pattinson and Taylor Lautner — posed for photos and took questions from a throng of about 75 or 80 journalists. It was my first Comic-Con event, but I have to say that the most heartening aspect happened before it began.

The heart moment happened when MSN Movies’ James Rocchi told me he completely agreed with my Twitter post this morning about Judd Apatow ‘s Funny People being “stunningly good” and “a kind of epic in the realm of selfish, scabrous, pissed-off comedian movies.” I’ll get into this in a subsequent post, but we both agreed it was a ballsy, mostly realistic and darkly funny film that never once took the manipulative, emotionally soothing way out.

Summit will open the Twilight sequel, a romantic triangle piece focusing on the mortal Bella Swan (Stewart), the vampire Edward Cullen (Pattinson) and a hottie werewolf Jacob Black (Lautner), on 11.20.

Lautner is clearly the most ambitiously press-friendly among the three. While Stewart and Pattinson did their usual usual — i.e., giving answers that suggested they’re a lot more complex and aloof and thoughtful than their participation in movies based on the Twilight series might suggest. It’s the age-old “I’ll do this but only if I can answer questions like Marlon Brando” routine. But Lautner, who has a bee-stung Beagle Boy nose , exhibited the personality of a publicist or a glad-hander. He clearly enjoys smiling and wants everyone to like him. He could be the next Regis Philbin if he wanted to go there.

If I was Lautner I would have the schnozzola re-shaped. I’m sorry but it’s an On The Waterfront longshoreman’s nose, or a nose belonging to a Russian wheat-farmer. If he’d come up through the ranks of old 1930s Hollywood studio system the moguls would have said “cute kid but fix the nose.” 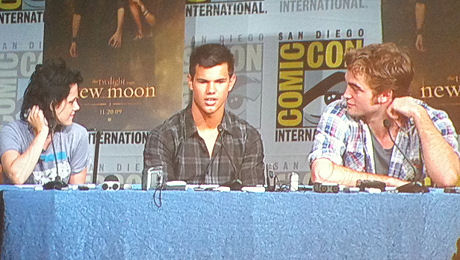 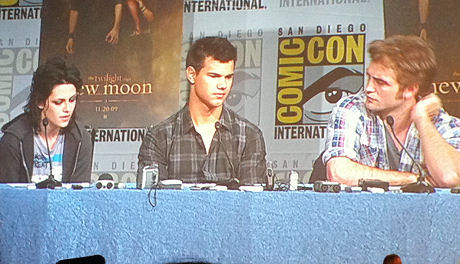 Stewart was wearing her Joan Jett haircut (for her currently filming The Runaways) and looked, frankly, kind of rock-and-rollish herself with a kind of cigarettes-and-booze attitude with stress bags under her eyes. She’s a fascinating actress, but clearly not someone who’s looking for peace as much as truth, even if it scalds.

Pattinson also looked vaguely seedy and grubby, like he took a shower the day before yesterday. He was in a pleasant-enough mood with a grinning, self-effacing attitude and nice white teeth.

The Summit publicists made the photographers stand back from the talent table about twelve feet or so. Apparently they didn’t want the actors to get all freaked out by a too-close physical proximity to the mongrelish paparazzi. (I’m certain it was the reps for Stewart or Pattinson who asked for the push-back; it sure as hell wasn’t Lautner.) This isn’t the way things are done at the Cannes, Sundance and Toronto press conferences but no biggie.

12:35 pm: In the hour since I posted my video of the New Moon kidz, my inbox has lit up with notifications that dozens of YouTube watchers around the world have watched it.