The Toronto Film Festival has announced four gala presentations and eighteen special presentations that will play from 9.10 to 9.19. I’ve been unofficially told that An Education is going to Toronto but it’s not on this particular list — no biggie. But where’s Nowhere Boy? That one has to go to Toronto. Harvey wouldn’t dare not bring it…would he? 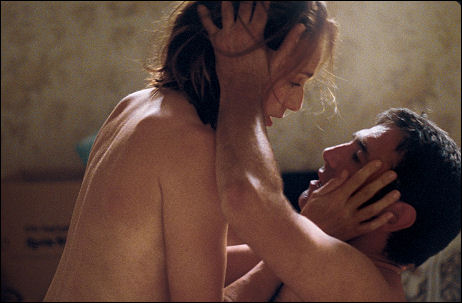 Here’s a partial rundown and some gut reactions:

Precious: Based on the Novel “Push” by Sapphire (d: Lee Daniels). Known quantity, screened left and right, no mysteries remain.

The Boys Are Back (d: Scott Hicks). Suddenly widowed, ill-prepared dad (Clive Owen) struggles to raise two sons on his own. Laura Fraser, Emma Booth. Gut reaction: Maybe but Hicks has been giving me trouble for years. Especially from No Reservations.

Bright Star (d: Jane Campion). Saw it in Cannes, found it immaculate and quite fine according to the Masterpiece Theatre terms it was shot in accordance with. Grieg Frasder‘s vermeer-lit photography is Barry Lyndon-like.

Hadewijch (d: Bruno Dumont). About a female religious novice whose ecstatic, blind faith leads to her expulsion from a convent. Gut reaction: Disinclined.

The Informant! (d: Steven Soderbergh). Oddball true-life whistleblower drama tinged with farce. Matt Damon as Mark Whitacre, a guy who decides to rat out his colleagues in exposing a multinational price-fixing conspiracy, and then gets into hot water for being dirty himself. Gut reaction: Of course.

The Invention of Lying (d: Ricky Gervais and Matthew Robinson). The trailer has made the world very wary, very concerned. Gut reaction: Could be trouble.

Partir (d: Catherine Corsini). Some kind of middle-aged, In The Realm of the Senses-like affair between Kristin Scott Thomas and Sergi Lopez. “Sudden,” “violent,””all-engulfing passion to the fullest,” etc. Gut reaction: No question.

The Vintner’s Luck (d: Niki Caro). A wine-and-creation movie about “an ambitious young peasant winemaker” and the three loves of his life — his wife, an intellectual baroness, and an angel named Xas. Gut reaction: First feature in four years by director of North Country and Whale Rider = sure.