“Up Against The Queen”

Ariel Levy has written a fair-minded, precisely observed and super-readable profile of Julie & Julia director-writer Nora Ephron in the 7.6.09 issue of The New Yorker . You’ll need a subscription or a daypass (or whatever they call it) to read the full article, but trust me — an excellent read. 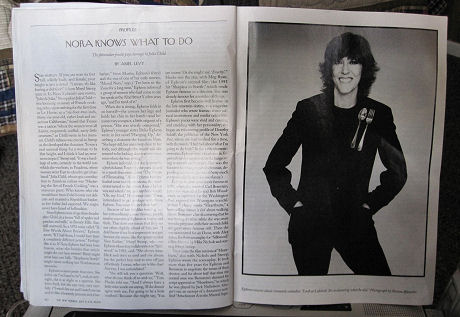 That said, I’d be derelict if I didn’t quote the last three paragraphs, which describe this August 7th Sony release, which costars Meryl Streep and Amy Adams, as half-transcendent and half-flat.

“I feel bad about what I’m going to do here,” Ariel begins, aping a phrase that Ephron herself used in a scathing profile of former New York Post publisher Dorothy Schiff. “But the truth is, Julie & Julia is not a fair fight.

“For half he film we are in Paris with Julia Child played by Meryl Streep [italics hers]. It is pretty transcendent. For the other half, we are stuck in Long Island City, Queens, with the ‘lowly cubicle worker’ Julie Powell, a character who is immature, self-pitying, and frazzled (which is to say, an average human being). Powell is played by Amy Adams, who is a talented actress, but she is up against the queen herself.

“When Adams, as Julie, is on the screen, it necessarily means that Streep, as Julia, is not, and you come to resent her for this.

“It is possible that the film would not have worked if it were simply a biopic of Julia Child — that it derives its narrative thrust and commercial potential from the interplay between a young woman idolizing and relying upon Child in the more-or-less present and the splendid story of Julia Child’s past. Perhaps Child is able to emerge in this film as an almost mythical creature because she is presented in contrast to a mere mortal.

“But there may be another reason the Julia Child portions of Julie & Julia are so irresistably vivid and the Julie Powell bits feel a little flat. It is possible that Nora Ephron no longer understands half as well what it’s like to be ordinary as she understands being remarkable.

As you might guess, the kicker works much better if you’ve read the entire piece.