I’m about to describe another scene in Inglourious Basterds (Weinstein Co., 8.21) that rubbed me the wrong way after I saw it last week for the second time. I actually found it infuriating. Movie-experience purists and spoiler whiners are again advised to steer clear, although this scene has already been described many times. 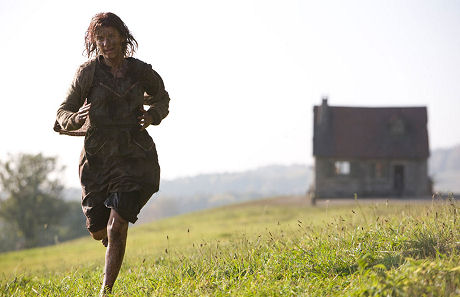 More an extended POV shot than a complete scene, it shows young Shosanna Dreyfus (Melanie Laurent) running like hell from a small French farmhouse seconds after her family has been killed by German soldiers under the command of Col. Hans Landa (Christoph Waltz), a.k.a. “the Jew Hunter.” The shot uses Landa’s farmhouse perspective. The camera looks out on a sprawling green field with the edge of a thick forest located slightly to the left, and maybe 150 yards off. And yet Shosanna avoids this shelter, staying wide open and fully exposed until the scene ends.

Now, any two-legged or four-legged living thing knows that the best way to escape a predator is to run for the trees. Especially if the predator has a pistol. Obviously. So the idea that Shosanna might choose to ignore the safety of the forest and run across the open field instead is really — no other term for it — ludicrous. The dumbest animal in the grip of the worst kind of blind idiot panic would head for the shade. The reason Shosanna doesn’t, of course, is because Tarantino wants to prolong his shot of her running across the field so Waltz has time to peer out, aim his pistol at her, change his mind, shrug, smile wistfully and say “Au revoir, Shosanna! Until we meet again!”

My blood runs cold when a director ignores basic animal-instinct reality in order to flaunt his/her moves. The interesting thing is that Tarantino’s description of this scene (Part 1, page 16) makes repeated references to Soshanna running for “the cover of the woods” and “the safety of the trees.” So he used common sense writing the scene but ignored it when he shot it. Brilliant.

The other dopey aspects of this portion of the film are so lame you have to laugh at them, or at least shrug. They’re used as components of the film’s arch absurdity, I suppose. You’re supposed to hoot, etc. But at the same time you’re supposed to absorb what’s happening with a certain solemnity.

When Col. Landa interrogates the French dairy farmer Perrier LaPadite (Denis Menochet) inside the farmhouse he asks if they might speak English since Landa’s French has been exhausted and he’s heard that Padite speaks it fluently. A silly idea, of course. Fluent English-speaking Parisians were a relative rarity in the 1940s, and even today French salt-of-the-earth rurals speak little if any English. 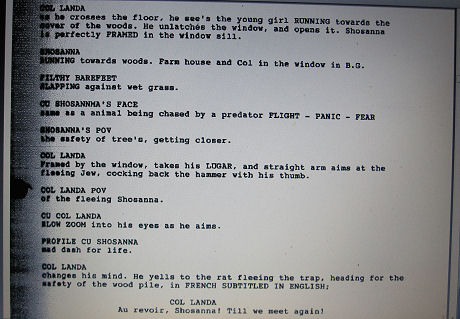 Landa then asks about the names of the absent Dreyfuss family, and Lapadite says that the son’s name is “Bob.” QT is paying hommage, I suspect, to Jean-Pierre Melville‘s Bob Le Flambeur. This despite the fact that no rural French family would have named a son Bob in the 1940s, i.e., before widespread Coca-Colanization of France began to take hold in the mid-to-late ’50s.

This scene also ties into a stupid math error. A title card says the farmhouse scene is happening in 1941, and the next time we see Shosanna she’s changing the letters on the marquee of a Parisian movie theatre, and a title card informs that it’s now “1944 — four years after Shosanna’s escape” (or words to that effect). Uhm, no…that would be three years after. The Landa visit happens in warm weather, or in the spring or summer or early fall of ’41. The 1944 portion of the film happens before D-Day invasion which began on 6.6.44, so the latest calendar mark would be the late spring/early summer. So there’s really no wiggling out of this. The Inglourious Basterds post-production team either ignored or never mastered basic math, or they did and QT wouldn’t allow them to fix it due to whatever.