These three are contending that Cannes journalists over-reacted to Lars von Trier‘s AntiChrist, and in so doing revealed their emotionally timid natures plus a lack of historical perspective. Poland/Morgan/Gross have seen AntiChrist but had many weeks, of course, to prepare themselves. What were they going to do — agree with the mob? Whatever their motives they’re clearly bending over backwards to be contrarian for the sake of contrarianism. And they’re flat-out ignoring how amateurishly awful Antichrist is. Forget shock value — I’m talking about basic chops.

The slow-mo “baby falling out of the window” monochrome sequence in the beginning is awful. Dragging out any tragic/violent event in slow-mo is one of the whoriest tricks in the book — second-rate directors have been avoiding it for years. The psycho-claptrap that we hear Willem Dafoe speaking to wife Charlotte Gainsbourgh in the aftermath of their loss is stunning. How could any director-screenwriter have okayed this stuff?

The film is brazen — the word is actually shameless — but there are no surprises or odd moves that startle in a knockout way. (Like, say, the church bells ringing at the end of Breaking The Waves.) All through the damn thing you’re muttering “come on…come on.” There’s no psychological uncovering in any of it. The movie is a blunt tool. Boilerplate notions of pacing and gradual building into the forest-cabin madness that leads to the third-act violence are required but absent. It’s a stunningly sloppy thing — ludicrous, appalling, lemme-outta-here.

You can’t review AntiChrist without acknowledging what Von Trier wrote in his “director’s confession” in the Cannes press book: “Two years ago I suffered from depression. Everything, no matter what, seems unimportant, trivial. I couldn’t work. Six months later, just as an exercise, I wrote a script. It was a kind of therapy, but also a search, a test to see if would ever make another film.

“The script was finished and filmed without much enthusiasm, made as it was using about half of my physical and intellectual capacity. Scenes were added for no reason. Images were composed free of logic or dramatic thinking. They often came from dreams I was having at the time, or dreams I’d had earlier in my life.” 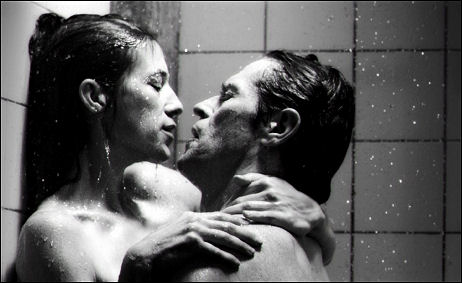 I lost my original review of AntiChrist an hour or so after the Cannes press screening, but I haven’t backed off an inch from what I wrote later that night after wailing and punching walls with my fist: (a) “It’s an out-and-out disaster — one of the most absurdly on-the-nose, heavy-handed and unintentionally comedic calamities I’ve ever seen in my life” and (b) “easily one of the biggest debacles in Cannes Film Festival history and the complete meltdown of a major film artist in a way that invites comparison to the sinking of the Titanic.

“A man whom I’ve admired and respected for many years has lost his mind for the time being, or at least lost it while he was writing and shooting the film. I just can’t fathom how the director of Breaking The Waves and Dancer in the Dark and Dogville could have made something so amateurishly awful. The decent and compassionate thing would be to forget Antichrist and to forgive Von Trier. To put it aside and move on on all fronts.”