There were two things different about last night’s 3D IMAX previews compared to the San Diego/ComicCon footage shown last month. The reel I saw here was, of course, shorter — 15 or 16 minutes compared to 24 minutes in San Diego — and the ending has a hurried montage ofAvatar‘s second half (the clash between Stephen Lang‘s military commandos and the Na’vi with Sam Worthington‘s Na’vi hybrid sure to take sides against his own). But there was another distinction. Actually a distraction. 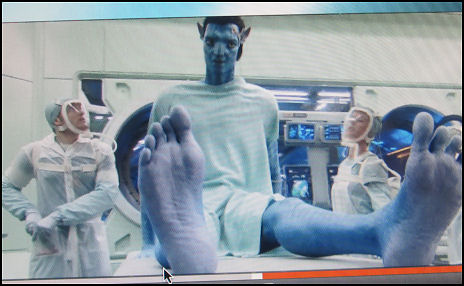 The Avatar footage, projected onto the huge IMAX screen inside Leows Lincoln Square, wasn’t quite as vivid and needle-sharp looking as the 3D San Diego reel. And yet LLS projects “real” IMAX (i.e., on super-sized film) vs. the digital “fake” IMAX-on-smaller-screens that other NYC theatres were showing. What gives? My semi-educated guess is that Avatar looks better with digital projection since it’s been an all-digital show from shooting to FX to post. Transferring to film (even IMAX film) just degrades. I know that what I saw wasn’t as on-the-money so what other conclusion could there be?

Beyond this I was feeling a little Avatar-ed out after it ended. I walked out saying to myself, “Hmmm….no bump-up. Same as before only less so.” Obviously because of the tech/focus issue but also because an Avatar visual highlights reel (i.e, the Na’vi/jungle monster/flying reptile-bird whoa stuff aimed at 12 year-olds) only takes you so far. It doesn’t wear well the second time. I need story, soul, structure, music, wit, great acting, etc.

Why does Worthington’s Jake Sully, a paraplegic military guy, act like an incorrigible 13 year-old when he wakes up from his Na’vi transformation operation and finds himself 10 feet tall and full of energy with two good legs? He didn’t anticipate that it would be a huge shock to suddenly find himself able to walk around? The laboratory authorities didn’t talk to him about adjusting before he went under? It’s kind of stupid that he just gets up and goes “this is really cool!” and lumbers out of the recovery room with the physicians warning him to stay put or else. I didn’t believe it. It felt bullshitty.

Plus the CG of his backside (including a tail) as he leaves the room looks too cartoony.

Down on Pandora the second monster (i.e., the big black one Scully is told to definitely run from) is right on top of him during the chase sequence. Why do big scary predators have to be within a step or two of their prey all the time? Why does every movie chase have to be so skin-of-our-teeth close? It gets old. Plus the monster moves so fast that his moves blurred out for me. My eyes couldn’t follow each and every whip-snap movement. 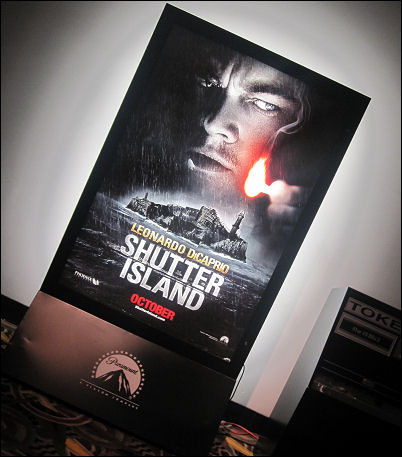 And how does it work exactly that Zoe Saldana‘s Na’vi character — a strong, fierce-eyed warrior named Neytiri — can speak English? She’s a Pandora native whose fellow Na’vi tribesmen speak in their native tongue with subtitles, so I don’t get it. I’m sure it’ll be explained down the road but it was one more thing to scratch my head about.

The 8 pm show was maybe 25% full, if that. A female Leows usher screwed things up in the early stages, telling people who showed their print-outs (like me) to go straight up to the fourth floor without telling them to get their orange wristbands from the Avatar/Fox guys on the main level. So a lot of us went up to the fourth floor only to be told to go all the way back down again.

I’m just going to take an Avatar break in my head until they start showing the full-length film to press sometime in November or whenever.