I just want to make it clear, as I tried to do yesterday, that seeing Avatar in its proper form at ComicCon — big-screen 3D IMAX — revealed a fusion of CG/organic realism that seemed like something really “extra.” It felt to me like an immersion into a real-seeming fantasy place than anything I’ve ever seen in a similar-type realm. (The CG in the Rings trilogy being one example.) 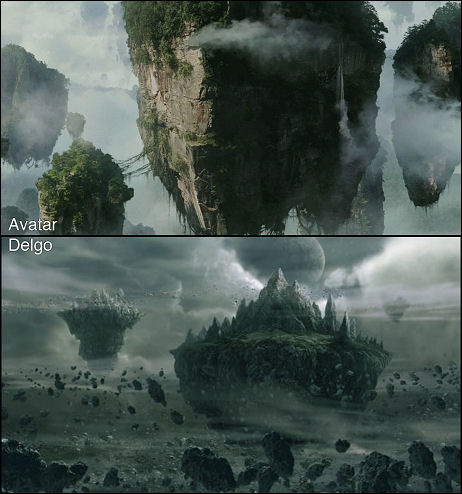 But I’m unqualified to get into the comparisons between Avatar, Delgo and Ferngully because I haven’t seen the latter two animated films. (You know me — I wouldn’t have seen either with a gun at my back.) That said, this Avatar/Delgo still comparison does, in a basic-template sense, speak for itself. I don’t think it’s entirely fair, however, for HE readers who have seen Delgo or Ferngully to compare them to Avatar based on the trailer. If they want to trash Avatar with authority, they’ll first need to catch the 16-minute 3D reel showing everywhere tonight.

At the very least the Avatar/Delgo comparisons may help out poor Delgo, which opened last December and made nothing. Delgo may be, in fact, the biggest proportional box-office wipeout of all time, having cost some $40 million and grossing $694,782. The Delgo DVD came out only two and a half weeks ago (on 8.4).