I’ve been as anxious as the next guy to see Nowhere Boy, Sam Taylor Wood‘s biopic about the young John Lennon in Liverpool. I’ve written about it several times, praised Matt Greenhalgh‘s script (saying it “has the same concise, straight-from-the-shoulder British scruffiness that his Greenhalgh’s script for Control had”), expressed interest in Kristin Scott Thomas‘s portrayal of Aunt Mimi, etc. But I’m thinking the good vibes may be over. 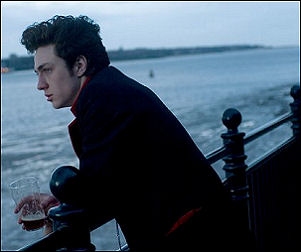 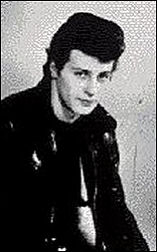 The reason is that after seeing the above still of Aaron Johnson playing Lennon (and presumably looking out upon Liverpool’s Mersey River), I experienced severe disappointment on three levels. Actually, make that four.

One, Lennon had light honey-brown hair and Johnson’s hair looks either dark brown or jet black. How many brain cells did it take for Wood to say to the movie’s hairdresser at the start of production, “Okay, Lennon’s hair was light brown so let’s make sure Aaron’s hair is as dark as Elvis Presley‘s was…perfect!” I warned Wood not to do this in a piece that ran last January (i.e., two months before Nowhere Boy began shooting), to wit: “They’d better get the hair color right — light honey-brown. If they screw this part up they’re dead.” And Wood screwed it up!

Two, this photo told me that Johnson doesn’t really resemble Lennon at all. You could sense Lennon’s impertinent and somewhat snippy personality in his features. Johnson looks like a doleful Italian longshoreman or short-order cook. If he resembles anyone, it’s ex-Beatle Pete Best — i.e., the drummer who got fired in 1962 to make way for Ringo Starr. Obviously Johnson’s performance could make all the difference. But I’m really steaming about the hair-color thing. You just don’t mess with hair when you’re trying to physically be someone as well as re-animate their spirit.

And three, Lennon had a somewhat large, distinctive and pointed British honker with a very pronounced bridge. Johnson’s nose looks nothing like this — it’s a thicker, rounded-off, slightly bent-to-the-right nose that isn’t the least bit Lennon-y. Wood could have told the makeup people to make it right, but she didn’t. Was the idea to make Johnson resemble Lennon as little as possible?

And look at the 19 year-old kid Wood chose to play Paul McCartney. His name is Thomas Sangster, and his hair color is wrong also — it’s too light. (Unless, of course, Wood had it darkened for the film.) Look at the picture below — does anyone think Sangster resembles McCartney even faintly? He doesn’t look like Macca — he looks like a chipmunk. Look at him! At best he could possibly play a 13 year-old version of George Harrison. Is Wood insane?

I have to be honest. The hair cock-ups suggest that all kinds of other things may be wrong with Nowhere Boy. If you get the hair-color wrong (something that’s easy to get right), the odds are you’re going to screw up in other ways. People tend to be consistent, I mean. If you have dishes stacked two feet high in your kitchen sink, you probably don’t brush your teeth or pay your bills on time. I’m feeling a little queasy about it now. This is a blade of grass that may tell the tale. I still like the script but all bets are off until further notice. I smell trouble. 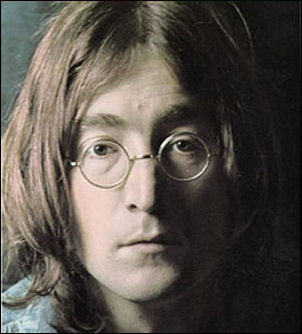