An HE reader who’s friendly with an LA movie buddy of mine wrote the following over the weekend: “My Dad and I saw Inglourious Basterds, which we loved. I’m so mad at the critics for thinking the movie is too violent or cruel, or Wells’ whole diatribe about the Basterds behaving no better than the Nazis they’re after. It’s a movie! Let’s have fun! If we can’t laugh at Nazis, what can we laugh at?.” 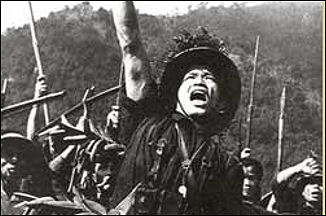 Wells response: It’s a movie! Have fun with the fake Nazis! Club their heads in for refusing to betray their friends….hoo-hoo!

Except I’m just wondering what this guy and his dad will think of Tarantino’s rumored sequel, Inglourious Vietnamese Basterds. D’ju read about it? It’s about an elite team of ornery North Vietnamese hillbilly badasses sent into South Vietnam in early ’68 to kill a whole bunch of no-good Americans and deliver some payback for torchin’ all those villages and slaughterin’ non-combatants who won’t give up the Vietcong.

The rockin’ first-act highlight comes when head Basterd Lambo Nguyen tells Sgt. Ernest Taylor of Middletown, Connecticut, that unless he provides information about a nearby company of American soldiers that the craziest Basterd of all, Wham-bam Phan, will beat his skull into mush with a baseball bat. Alas, the stubborn Taylor refuses to betray his buddies, and when Wham-Bam Phan lets him have it….whoa! Very cool! Blood and brain matter mixed with the jungle grass, and covered with insects in minutes!