I’m not the first one to say this, but scan the lineup for the 47th New York Film Festival and tell me where the big-jolt films are. Because all I see are a lot of Cannes and Toronto re-runs along with a few marginals and oddities. 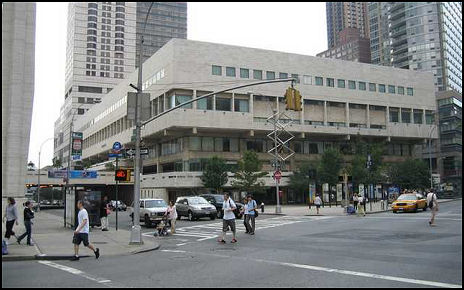 The old Alice Tully Hall (i.e., before the big renovation).

I’m sorry but I’ve been visiting this festival off and on for a bit more than 30 years now — I remember what a charge it was in the Richard Roud days of late ’70s and early ’80s — and it’s hard to look at what’s happening today and go, “What happened?” Because the NYFF really used to matter.

I wasn’t around in the glory days of the ’60s and early ’70s, but even in my early New York days (i.e., mid-to-late Jimmy Carter era) it used to be a routine thing for at least four or five must-see major-director films to have their big debut there. You pretty much had to see the whole NYFF lineup back then. Anything that showed acquired a certain associative pedigree.

Nobody could afford to miss the NYFF in those days. It was vital and mesmerizing. I used to sit in the old Alice Tully Hall and get high from the wonderful projection and sound, and the stimulating q & a’s. By accident I met Truffaut at an early ’80s NYFF, and spoke to him for a few minutes — I’ll never forget that. I used to tell myself “this is it, the center of the cool-movie universe, the time of your life, doesn’t get any better,” etc. The black-tie parties were amazing. The non-black-tie parties were amazing. I met the greatest women at these parties and even got lucky once or twice. I remember how fascinating it seemed to watch Roud smoke those unfiltered cigarettes, one after another.

I guess I’m paying closer attention to the NYFF because I’m living here now and feeling closer to the action as it were. I know what’s been happening at the Film Society of Lincoln Center and I’m not trying to throw any stones at anyone. I’m just sorry that the NYFF current isn’t the same as it once was. I miss that special air. I would breathe that air again.