The key sentence in Katrina Onstad‘s profile of director Atom Egoyan in yesterday’s N.Y. Times reads as follows: “A complex, Egoyan-esque meta-narrative has been imposed on the film that was supposed to be [Egoyan’s] most direct” — i.e, Chloe, an emotionally-intimate drama that will play at the Toronto Film Festival. “It’s now the tragic movie about marriage during which one very famous marriage ended so tragically. 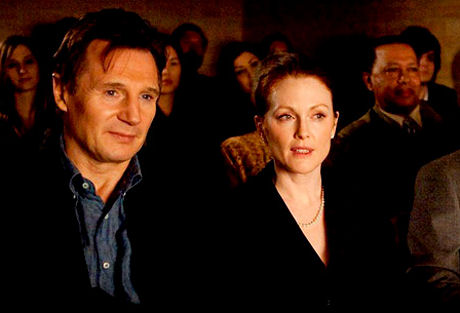 Onstad refers, of course, to Chloe star Liam Neeson having lost his actress wife, Natasha Richardson, last March when she died from a head injury caused by a bizarre skiiing accident. The tragedy occured as Chloe was nearing completion of shooting in Toronto. Neeson left the shoot for a brief period, saw to his family and his wife’s burial, and returned for a final couple of days of filming.

Egoyan tells Onstad about how Neeson “pulled him aside on the set and told him of Ms. Richardson’s fall. ‘He’d just talked with her, and everything seemed to be okay. But there was a feeling of: ‘You should go.’ And it just changed the course of everything.'”

“First you think, ‘Oh my God’…the human side takes over, and you try to proceed in a way that’s respectful and honorable,” Chloe producer Ivan Reitman tells Onstad. “But there are always one’s financial obligations. Films involve hundreds of lives.” A flood of insurers and completion bonders came on the set, and everyone went over the script, altering sequences for to give Neeson time to attend Richardson’s funeral and whatnot.

“But within days he quietly returned to Toronto in a private plane, undetected by the news media,” Onstad writes. “‘He conducted himself in an extraordinary manner,’ Mr. Reitman recalled. ‘He was under pressure from the sadness of what had happened, and he channeled it into the performance of those two days.'”

“Over the summer Mr. Egoyan attended test screenings of Chloe with audiences in Los Angeles and Toronto, reviewing the feedback with Mr. Reitman. The response has been extremely positive, Mr. Egoyan said; no clarity issues.” 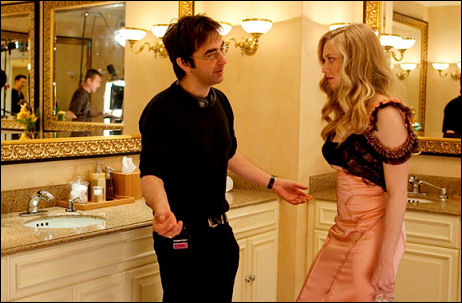 But I wouldn’t be honest if I didn’t admit to having I have a little man inside telling me that Chloe may underwhelm on some level. Part guess, part intuition. Haven’t Egoyan’s films been generally seen as underwhelming in this and that way for the last several years? (I’m not trying to be an asshole but for me The Sweet Hereafter was his last truly stirring film.) Why wasn’t Chloe chosen to open TIFF? Why are distributors being stand-offish? I’m just asking. I have no dog in this fight, although — honestly? — I want to see Chloe because I suspect it may contain certain oblique echoes. Okay, so I’m a tabloid-reading lowlife.

“It will have interesting overtones because it is about how precious a marriage is,” Egoyan tells Onstad. “Maybe it will always be known as the film Liam was working on when that happened. But ultimately we finished the film, and Liam is magnificent in it. Now all we can do is wait and see.”