I need to ask a rhetorical question. If you had a fairly tall and strapping lead actor in your film like Leonardo DiCaprio, would you have any concerns about casting the winky-dinky-sized Ellen Page in a costarring role? I’m just struck every time I see her in a movie still alongside this or that actor how she looks like she’s maybe 9 or 10 years old, if that. 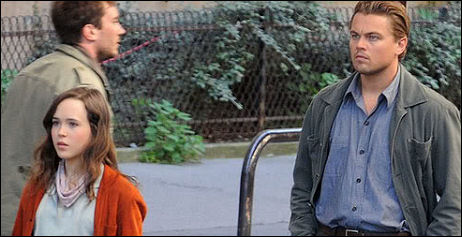 Just look at the above shot of her walking in front of DiCaprio. I’m sorry to sound like a size-ist asshole but are you going to tell me the discrepancy isn’t striking? His head is at least 50% larger than hers. Look at them! He could pick her up and carry her under his arm like one of those stuffed Jack Skellington dolls. Page is a very fine actress — nobody’s talking about her emoting here — but she’s obviously in the same size realm as the superb Peter Dinklage (who easily gave the best performance in Sidney Lumet‘s Find Me Guilty), Billy Barty, Mickey Rooney and Danny DeVito.

Now that I think of it Page isn’t really analagous to Dinklage. I think of Dinklage as an adult actor of impressive range who happens to be of a very short stature. In the same sense Page, as sharp and powerful as her performances tend to be, doesn’t seem to exude any kind of natural adultness or been-around-the-block femininity. She looks to me like someone’s growth-stunted kid. Like I said in an ’07 riff about Juno , the idea of Page having had sex with some guy like Michael Cera (who’s fairly tall and lanky) and then gotten pregnant seems perverse. She’s too little for that.

Yes, she was great nonetheless in Juno. And I’ll buy her as a spunky roller derby player in Whip It and probably in anything else. She’s really got it within. I guess all I’m really saying is that she looks odd standing next to tall guys. Veronica Lake had the same problem opposite Joel McCrea in Sullivan’s Travels. I guess because it’s a little unusual in real life to see basketball players going out with pixie-sized women. I know it happens from time to time, but it looks really odd when it does. 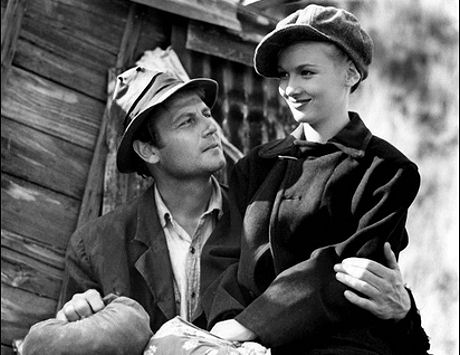 I’m basically saying Page would be ideally cast opposite Al Pacino or Michael J. Fox or DeVito or anyone in that realm, but not opposite Ryan Reynolds or Jeff Goldblum or Richard Kiel or anyone extra-tall. Well, you could cast her opposite Reynolds but guys like me would say stuff if you did. She would have been perfect alongside Alan Ladd in This Gun for Hire or opposite Humphrey Bogart in anything.

I realize that saying anything about a person’s size is seen in p.c. circles as almost the same thing as remarking about their skin color or ethnic heritage or whatever, but disproportionate sizes in actors in the same scene have a way of standing out in an odd sort of way, and I don’t think I’m being a jerk for pointing this out.