We all knew Jason Reitman‘s Up In The Air, which will screen at the Toronto Film Festival, will open sometime in the fall/holiday period. Slashfilm’s exclusive poster reveal confirms a December release. Along with a certain emotional signature. 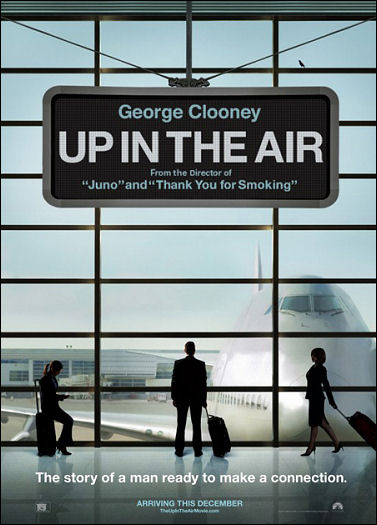 One-sheet for Jason Reitman’s Up In The Air ((Paramount, sometime in December).

The crisp and clean copy line — “the story of a man ready to make a connection” — feeds into the image of alone-ness (as opposed to garden-variety loneliness) that George Clooney‘s character, one senses, has chosen for himself out of…well, any number of reasons. But everyone feels this way on some level. Particularly at airports. Not “oh, God, I’m all alone” but “yup, just me and my agenda and my flight leaving in 75 minutes…cool. But it would be kind of nice if there was…I dunno, a little something else going on.”

My favorite part of the poster is the little bird perched on the window frame just above the R. He’s also wondering what’s next and where to go.

Up In The Air has been a popular movie title, according to the IMDB. It’s been used eight times before for films released in 1915, two in 1918 (one directed by Gregory La Cava), 1923 (for a comedy short), a 1926 animated short, and features released in 1940 and 1969. And there’s another 2009 film using the title, directed and written by Wayne Llewellyn.

I’m still miffed at those snark-heads calling me gullible for posting a reaction to the film by a guy who almost certainly attended a research screening a few weeks ago. A guy I know by way of name, phone number, photo, a phone conversation, and previous emails plus one memorable Hancock review he sent me last year. On top of which my having read and liked about half of Reitman’s Up In The Air screenplay. That said, nobody knows anything for dead certain and the film will play it as it lays.