I meant to run a comparison of these two posters for An Education last week but I couldn’t convert a PDF image of the Australian version (r.) with my Corel photo manipulation program…don’t ask. And then In Contention‘s Guy Lodge ran with it yesterday. Sony Classics’ domestic poster (a) conveys a neutral romantic vibe and (b) conceals/Photoshops the fact that Peter Sarsgaard‘s character in the film is much older than Carey Mulligan‘s, which of course is a major plot point. 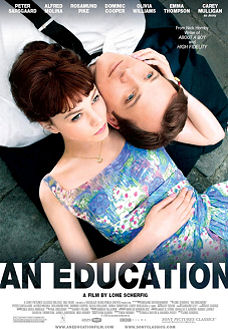 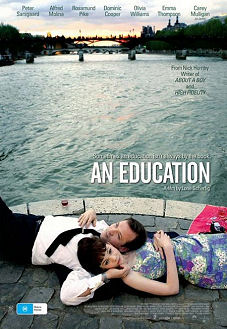 The Aussie poster doesn’t focus on their faces in order to include the romantic ambiance of Paris, which I personally find much more appealing than the two-shot. Oh, wait…I get it. The Sony Classics ad guys figured that under-25 American Eloi/moron class would feel alienated by a shot of Paris (“eewww…is this movie in French?”) and decided to go generically “romantic”. Both posters conceal the fact that the story takes place in 1961, which would probably be a problem for a certain Eloi percentage as well.