There are only four leap-out portions in David Segal‘s 8.15 N.Y. Times piece about the convulsive goings-on at the Weinstein Co. (“Weinsteins Struggle to Regain Their Golden Touch”). 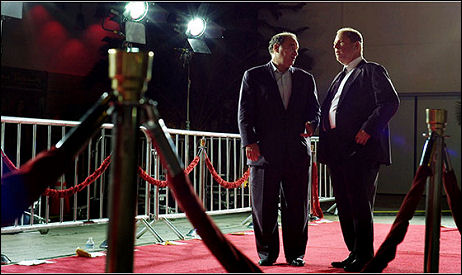 The first is a vague hint that Segal may have seen Nine or Nowhere Boy or Youth in Revolt…maybe. But that’s all she wrote because he cops out and doesn’t identify which of the six completed Weinstein Co. films he was shown, which strikes me as a very candy-assed, needlessly covert way to go. Not even hints, for Chrissake.

Harvey and Bob Weinstein “were downright generous with me when it came to screening their coming movies,” he writes. “In fact, they shared as much of their slate as was ready — six movies in all, as well as ads, DVDs and rough cuts of unfinished products.”

Think of it…a major August 2009 piece about the Weinsteins and not even a slight intimation about whether or not Nine has that schwing? No backstage gossip of any kind? No discussion about how it might play for Joe and Sheila Popcorn in Jacksonville? No acknowledgement or argument that this ambitious Rob Marshall Oscar-bait musical is or isn’t the big make-or-breaker?

The second is Harvey telling Segal that “the ship’s riding on the slate” and that “if by February, when we release Hoodwinked 2” — he playfully thumps a hand on the table, dramatizing the sound of failure — “I’ll be driving you, or making cheap hamburgers, or selling trailers or refrigerators or something. If the slate works, we’re right back to plan.” Any time a big-wheel talks about flipping burgers…well, draw your own conclusions.

The third stand-out is a little tingle-hint about Youth in Revolt, which will show at the Toronto Film Festival. Segal begins by talking about how he “got a hint of [Bob Weinstein‘s] attention to detail at a recent test screening of Youth in Revolt, a teenage comedy in the vein of Juno. The director, Miguel Arteta, said that for weeks he and Bob had lengthy back-and-forths over seemingly minor decisions, like this one: Does the last scene of the film need a voice-over?

“Bob said yes. Mr. Arteta said no. Bob’s version screened on this particular night in an East Village theater in New York, and afterward, a focus group of 20 audience members were peppered with questions. Among them: How many of you liked the voice-over in the last scene? Every hand but one went up.

“Unbeknownst to the attendees, Mr. Arteta sat two rows away, and after that vote, he turned to Bob, who sat at the rear of the theater, offering him a grateful, smiling shrug that said, ‘You were right.'”

What does this tell us? It tells me that Youth in Revolt may have issues. Any film that needs a line or two of narration….well, you know what they say. It’s not just Segal’s article telling me this. It’s also Michael Cera, the most inert and unassertive one-trick-pony in the film business right now, being the star.

The fourth stand-out is a quote from longtime Weinstein Co. lover/supporter (and my former boss) Kevin Smith. “They had impeccable taste when they were hungry,” Smith tells Segal. “The problem is that they’re not really hungry anymore. They’re starving and desperate.” Yikes.

That said, I’m very keen on seeing the Weinstein slate and can’t wait, especially, to see The Road and Nowhere Boy and, yes, Nine.