In this morning’s Mad Men vs. Woodstock piece, N.Y. Times columnist Frank Rich quotes Vanity Fair‘s Bruce Handy: “As in Hitchcock, the Mad Men characters are unaware of shocks that the audience knows all too well lie ahead, whether they be the Kennedy assassination and women’s lib or long sideburns and the lasting influence of Doyle Dane Bernbach’s witty, self-deprecating ‘lemon’ ad for Volkswagen.” 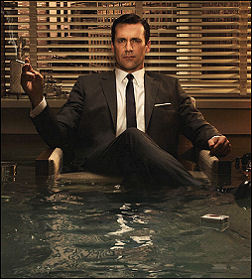 “What we don’t know,” Rich comments, “is how the characters will be rocked by these changes. But we’re reasonably certain it won’t be pretty. That’s where the drama is, and it’s tense.

“In the world of television, Mad Men is notorious for drawing great press and modest audiences. This could be the season when the viewers catch up, in part because the show is catching up to the level of anxiety we feel in 2009. In the first two seasons, the series was promoted with the slogan ‘Where the Truth Lies.’ This year, it’s ‘The World’s Gone Mad.’ The ad hyping the season premiere depicts the impeccably dressed Don Draper, the agency executive played by Jon Hamm, sitting in his office calmly smoking a Lucky Strike as floodwater rises to his waist.

“To be underwater — well, many Americans know what that’s like right now. But we are also at that 1963-like pivot point of our history, with a new young president unlike any we’ve seen before, and with the promise of a new frontier whose boundaries are a mystery. Something is happening here, as Bob Dylan framed this mood the last time around, but you don’t know what it is. We feel Don Draper’s disorientation as his once rock-solid ’50s America starts to be swept away. We recognize his fear that the world could go mad.”