Originally posted on 5.15.09 in Cannes: “I don’t know what I was expecting exactly from Ang Lee‘s Taking Woodstock (Focus Features, opening today), but what I saw didn’t deliver. This backstory saga about the legendary Woodstock Music Festival of ’69 works in spots and spurts, but it too often feels ragged and unsure of itself, and doesn’t coalesce in a way that feels truly solid or self-knowing. 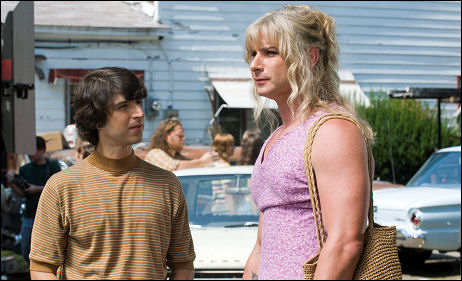 At best it’s a decent try, an in-and-outer. Spit it out — it’s a letdown. I wish it were otherwise. I’d like to be more obliging because I love many of Lee’s films and fully respect his talent. I remember and cherish the spirit and the legend of the 1969 Woodstock Music Festival. And I appreciate what a massive undertaking it must have been to try and recreate it all within a dramatic prism.

This story comes through but it feels analagous to a story of the D-Day Invasion that focuses on Francois, a closeted young man in his 30s who doesn’t want to work at his parents’ Normandy bakery any more. “Merci, General Eisenhower, for allowing me to finally move to Nice and be openly gay!”

And the Eliot story is weakened, in my book, by Imelda Staunton‘s strident and braying portrayal of Tiber’s mother-from-hell. I’ve known my share of Jewish moms and I didn’t believe her. Nobody is that humorless or stupid (in terms of recognizing economic opportunity) or dark-hearted.

And as noted, the big sprawling back-saga of how the festival came together — the element that audiences will be coming to see when it opens — too often feels catch-as-catch-can. It doesn’t seem to develop or intensify, and there’s no clean sense of chronology. 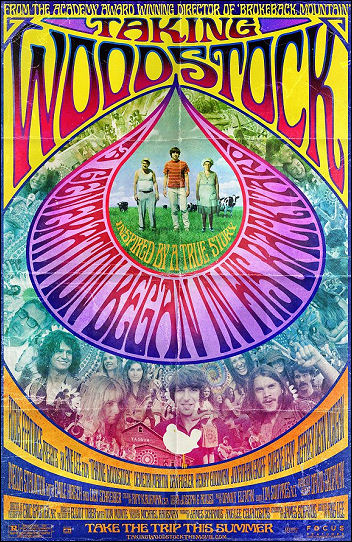 And there’s at least one glaring inaccuracy when a random festivalgoer declares a day or two before the event begins that “it’s a free concert, man…haven’t you heard?” My recollection is that it wasn’t declared free until the concert had begun and the fences had come down and the organizers realized they’d lost control.

Comedian Demetri Martin is steady and likable as Tiber, although too much of the time he’s been directed to look overwhelmed or mildly freaked. (This was a man of 34 who’d been around a bit — Martin plays him like Dustin Hoffman‘s Benjamin Braddock.)

Eugene Levy is quite good as Max Yagur, the kindly but shrewd dairy farmer who leased the land to Woodstock Ventures. Liev Schreiber delivers a mildly amusing turn as Vilma, a blond-haired cross-dresser whom Eliot hires to provide security for the El Monaco, but his character has no real function or arc — he’s just providing Greek-chorus commentary. Jonathan Groff does a decent job as Michael Lang, the most well-known of the concert promoters, playing him as a serenely confident Zen type. (I loved the way he gets around on horseback in the second half of the film, whether or not that’s accurate — it’s a good bit.) 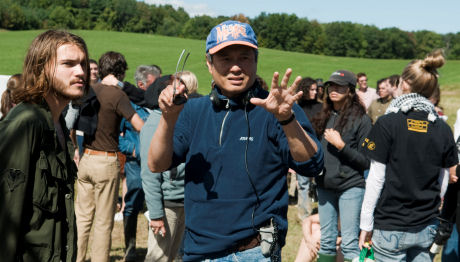