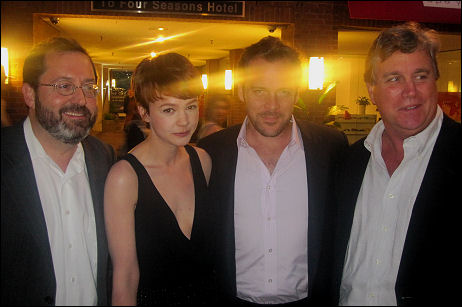 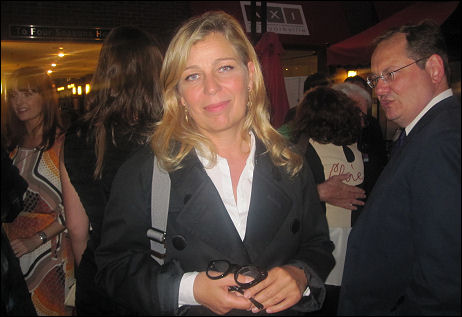 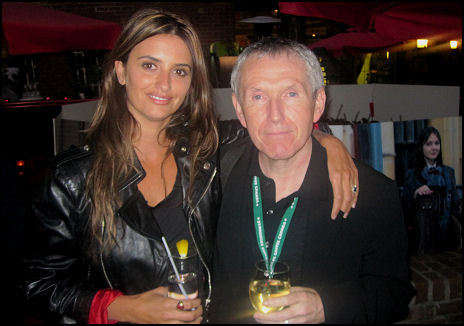 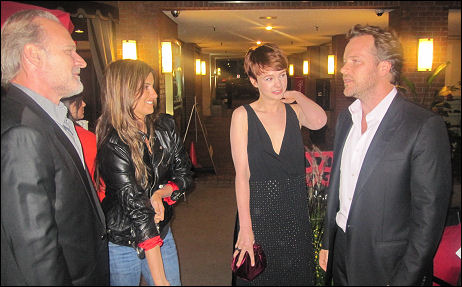 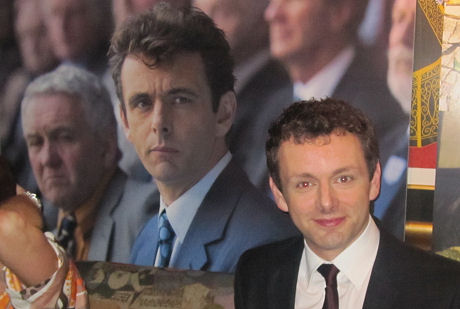 My Toronto Film Festival structure is already starting to fall apart. I plan and organize and copy and paste like an obsessive accountant before I come here each year, and then it all goes to hell in a kind of tornado-like gale before the second day is through. I know which screenings I want to get to, but the interviews and parties and press conferences just seem to whirl around like debris. There’s just not enough time in the day to see and do everything you want to do and write about it.

I saw four films yesterday (including Grant Heslov‘s The Men Who Stare at Goats) and haven’t tapped out a word about any of them. (Well, I did write about them this morning but the Bell internet re-booted after I’d written about ten graphs and I lost the whole friggin’ thing.) All I’m planning to do now is stop by the Sony Classics dinner at Mirabelle, which starts at 7 pm. I’ll post some fresh photos later this evening, and tomorrow is a new day.

Incidentally…I kind of hate it when I’m sitting alone at a cafe and a couple approaches and right away I start to discreetly eyeball the lady because she’s exceptional looking, and right away the guy starts eyeballing me with an expression that says, “Whaddaya think you’re doing?…she’s with me, we’re in love…look at somebody else!” Whenever that happens I look away for a second or two, not wanting to be rude or provoke anything, but then I resent myself for wussing out. It’s okay to look as long as you’re not obnoxious about it, I think. What’s the guy gonna do?

Joel and Ethan Coen‘s A Serious Man is a brilliant LQTM black comedy that out-misanthropes Woody Allen by a country mile and positively seethes with contempt for complacent religious culture (in this case ’60s era Minnesota Judaism). I was knocked flat in the best way imaginable and have put it right at the top of my Coen-best list. God, it’s such a pleasure to take in something this acidic and well-scalpeled. The Coens are fearless at this kind of artful diamond-cutting. 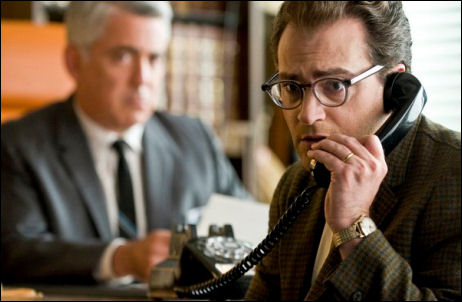 A Serious Man star Michael Stuhlbarg on phone; Adam Arkin is the out-of-focus guy (i.e., an attorney) behind him.

The wickedly acidic and funereal tone and lack of stars means it isn’t going to make a dime, but it’s a high-calibre achievement by the most gifted filmmaking brothers of our time, and it absolutely must rank as one of the year’s ten Best Picture nominees when all is said and done. The Academy fudgies will not be permitted to brush this one aside, and if they do there will be torches and pitchforks such as James Whale never imagined at the corner of Wilshire and La Peer.

The worldview of this maliciously wicked film (which isn’t “no-laugh funny” as much as wicked-bitter-toxic funny, which I personally prize above all other kinds) is black as night, black as a damp and sealed-off cellar. Scene after scene tells us that life is drip-drip torture, betrayal and muted hostility are constants, all manner of bad things (including tornadoes) are just around the corner, your family and neighbors will cluck-cluck as you sink into quicksand, etc.

This is the stuff that true laughter is made of, and this is a genuinely wonderful film to sit through because of it. It’s so refined and compressed and jewel-cut, so precisely calibrated and cold as nitrogen, and yet hilarious as Hades. Literally. I can’t wait to catch it a second time.

Only a couple of tough Jewish filmmakers could make a film this despising and contemptuous of their own. And what a way to spur the sales of Jefferson Airplane CDs! 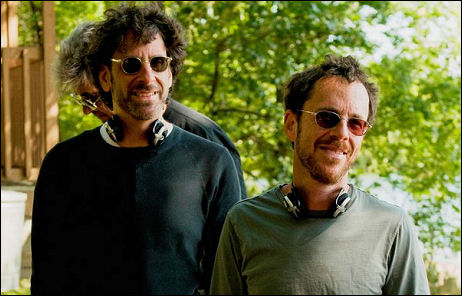 Set in 1969 or ’71 (to judge by the music), A Serious Man is about a decent but fatally passive and acquiescent college (High school?) physics teacher named Larry Gopnik (Michael Stuhlbarg) and his family, along with his extended family of neighbors, synagogue members, rabbis, attorneys and whatnot who live in St. Louis Park, Minnesota — a suburb of Minneapolis.

The story is about Gopnik grappling with one horrific threat and misfortune after another. His wife Judith (Sari Wagner Lennick, who looks like Mrs. Shrek minus the green skin) is planning to leave him for a 50ish grotesque named Sy Ableman (Fred Melamed). The father of a South Korean student looking for a better grade tries to bribe Gopnik and then sue him for defamation when he won’t accept it. His application for tenure appears threatened. His no-account brother Arthur is living on the couch, and is being investigated by police for indecent behavior. There’s a slim and foxy next-door neighbor who sunbathes nude in hetr back yard.

Every character in this film except for the teenage kids and the next-door nudist is an appalling Jewish grotesque. The grotesques in Mike Leigh’s films have nothing on this bunch. The thought of actually being inside the head and the skin of one of these characters …eewww! In a certain light A Serious Man is almost a kind of companion piece to Todd Browning‘s Freaks, except that Browning’s film is greatly compassionate and caring and A Serious Man is anything but.

You know what this film philosophically is in a nutshell? That kiki joke I passed along a couple of years ago. The one about two anthropologists captured by cannibals in New Guinea, etc.? Chief to anthropologhists: “Death or kiki?” Anthropologist #1 chooses kiki and is beaten, tortured, whipped, flayed and eaten by crocodiles. The chief asks Anthropologist #2 the same question, and he says, “I’m not a brave man so I’ll choose death.” And the chief goes, “Very well, death…but first, kiki!”

I’ve just seen the most eloquent, affecting and altogether best film of 2009…so far. Yes, better than my beloved The Hurt Locker. If it doesn’t win the Best Picture Oscar next February…well, okay…I’ll live. Jason Reitman will live, George Clooney will live, Paramount publicity will live, Brad Grey will live, your family and friends will live, and the sun will come up the next day. 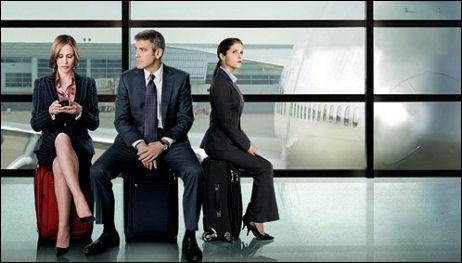 (l. to r.) Vera Farmiga, George Clooney, Anna Kendrick in Jason Reitman’s Up In The Air.

But Up In The Air really has it all — recognizable human-scale truth, clarity, smart comfort, the right degree of restraint (i.e., knowing how not to push it), and — this got me more than anything else — a penetrating, almost unnerving sense of quiet.

This is one of the calmest and most unforced this-is-who-we-are, what-we-need and what-we’re-all-afraid-of-in-the-workplace movies that I’ve ever seen. From an American, I should say. (The Europeans have almost made job-anxiety films into a genre — i.e., Laurent Cantet‘s Time Out, etc.) But I would guess that Up In The Air will play very, very well in Paris. It’s a film that walks and talks it and knows it every step of the way. Work, adulthood, asking the questions that matter, compassion, family, stick-your-neck-out, etc. The whole package. With an almost profound lack of Hollywood bullshit and jerk-offery. And a kind of Brokeback Mountain-y theme at the finale — i.e., “move it or lose it.”

Up In The Air doesn’t tell you what to feel — it lets you feel what it is. All the best movies do that. They don’t sell or pitch — they just lay it down on the Oriental carpet and say to the viewer, “We’ve got a good thing here, and if you agree, fine. And if you don’t, go with God.”

You know what? The hell with that attitude. If you really watch and let this movie in and then say, as a friend of a good friend said after watching it in Telluride a few days ago, “I don’t know…it’s nice but it’s more like an okay ground-rule double than a homer,” then due respect but you’re the kind of person who likes candied popcorn and Strawberry Twizzlers and feel-good pills. No offense.

Variety‘s Todd McCarthy called it “a slickly engaging piece of lightweight existentialism.” That’s an unfair and inappropriate characterization. There’s a difference between lightweight and having the goods and taking it easy and laying it on gradually. 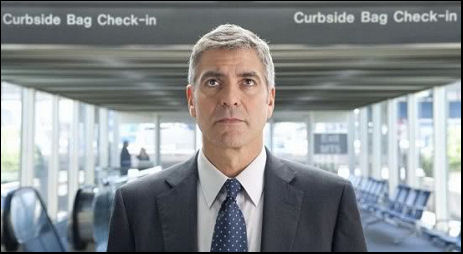 The thing that puts Up In The Air over is that it’s about right effin’ now, which is to say the uncertain and fearful Great Recession current of 2009. Reitman has been working on it for six years, and if it had come out last September — just as the bad news about what those greedy selfish banking bastards had done was being announced and everyone started to mutter “uh-oh” to themselves — it wouldn’t be reflecting the cultural what-have-you as much as it is now. And yet it never alludes to anything that specific. It doesn’t have to.

We all know about the story by now. Ryan Bingham (Clooney) is a kind of lightweight Zen smoothie who specializes in gently firing people when their bosses are too chicken to do it themselves. He doesn’t just like travelling around in business class seats and staying in nice hotels — he relishes the sense of belonging and security that he gets from being constantly in motion and never digging into a life of his own. And it’s easy to spot the arc — i.e., will Ryan find some way to let go of skimming along and maybe go for a little soul infusion?

The basic story propellant comes from two women who represent a certain kind of change/growth/threat element — Alex (Vera Farmiga), a fellow traveller who’s an exact replica of Bingham save for her sexuality, and with whom he strikes up a nice groove-on relationship in the film’s beginning, and Natalie (Anna Kendrick), a hamster-sized junor exec type who ‘s sold Ryan’s boss (Jason Bateman) on whacking people through a video conferencing system rather than face-to-face.

But I don’t want to get into the story more than that. What happens, happens for the right reasons. The main thing is that none of the developments feel the least bit ungenuine. And I will square off with anyone who says the ending isn’t sufficiently “happy.” Anyone who doesn’t realize that Clooney is quite another man and open to the next good thing at the finale simply hasn’t been paying attention.

There are many witnesses in this film a la Reds — real-life people who’ve been laid off and are facing the abyss in more ways than one — and I’ve already read complaints that Reitman overplays this card. I respectfully disagree. The clips appear symmetrically (i.e., at the beginning and end), and have an added weight at the finale. “Repetition” doesn’t necessarily mean “repetitiously.”

I’m really glad I caught Up In The Air at the beginning of the second wave — i.e., immediately post-Telluride. By the time it comes out on 11.13.09 it’ll be something else, and by that I mean the movie that snarkers will be looking to shoot down just to do that. Snarkers are so reprehensible. They pummel and flatten things down and rob them of their fresh-soil beauty.