The Envelope‘s Pete Hammond nearly reported today that Sony Classics will be distributing Michael Hoffman‘s The Last Station. I mean, he didn’t actually report this but he did strongly, heavily hint at same. The Leo Tolstoy/Westside Pavillion drama, which costars Christopher Plummer, Helen Mirren, James McAvoy and Paul Giamatti, will open in December in order to Oscar-qualify all around.

“I’m not too shy to go and talk to the Governor of California, Arnold Schwarzenegger, and to ask him once and for all to look at [Roman Polanski‘s situation],” said Harvey Weinstein in an article posted today in the Independent.

“The problem [has] to do with the legal situation in the state. They are doing this because they want a circus, to make their toughness overt — and that is where I draw the line. This is the government of the United States not giving its word and recanting on a deal, and it is the government acting irresponsibly and criminally.

“It is a shocking way to treat such a man. Polanski went through the Holocaust and the murder of his wife, Sharon Tate, by the Manson family. How do you go from the Holocaust to the Manson family with any sort of dignity? In those circumstances, most people could not contribute to art and make the kind of beautiful movies he continues to make.

“When Martin Scorsese was up to win best director for Gangs of New York, we faced Polanski and The Pianist. We were campaigning hard for Marty because he had never won best director, but when Marty lost to Roman, he turned to me and said: “I’m so happy right now. Of all the people in the world that I’d want to lose to, it’s Roman.

“‘You have to understand that Polanski’s films have influenced me as an artist all these years and his terrible political situation has been something we have all had to suffer through,’ he said. ‘We won because Roman won.”

“I think the reason we can all be on Polanski’s side over this is not to do with what happened in 1977. It’s to do with the fact that the punishment for what happened so many years ago had already been decided.

“The deal was that if he spent time in prison, which he did pre-sentencing, his sentence would be commuted but when he came back to sentencing the judge went back on the deal. Forget about the Seventies era and whether this is excusable – this is a miscarriage of justice, and the government is making him a scapegoat.”

“American lynch mobs never die; they only become more self-righteous about their savagery.” — critic Jonathan Rosenbaum in a 9.28 posting about Roman Polanski‘s situation.

If rectum bombs catch on in the terrorist world, airline passengers in the near future will have to submit to scanning devices that are more penetrating and all-seeing than ones now being used.

A few hours before Roman Polanski was arrested in Zurich, Ratner taped an interview for BlogTalkRadio’s “Movie Geeks United” show and announced he’ll be producing a sequel to Marina Zenovich‘s 2008 documentary, Roman Polanski: Wanted and Desired.

On top of which Movie Geeks United will post a two-hour Roman Polanski “Director Series” discussion on Sunday, 10.4.

Also featured will be highlights from a January 2008 interview with Marina Zenovich, director of Roman Polanski: Wanted and Desired.

How exactly is Roman Polanski‘s The Ghost, a political thriller costarring Pierce Brosnan and Ewan MaGregor, considered to be in limbo now that Polanski is temporarily in a Swiss slammer? 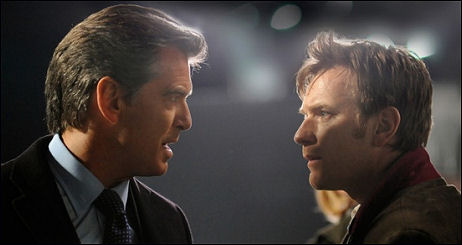 We’re in a down market for smallish character- or plot-driven adult films (and especially ones starring Brosnan and MacGregor), but since Saturday’s arrest this film is in great shape…hello? Supermarket moms will want to see this now so they can hiss Polanski’s name when it appears on the credits. And with any luck rural retards will be out protesting it with placards when it comes to their plex…”we don’t want this film shown in our God-fearing Christian community!,” etc. Before Saturday The Ghost was looking like an in-and-outer and maybe even a straight-to-DVD title, but now it’s got a fighting chance to actually make some money.

And getting it ready for release will be a snap, even if Polanski gets serious American jail time, which he won’t.

Several weeks’ worth of extra editing, music scoring and sound mixing may be required before it’s ready to play commercially, but Polanski will have some measure of limited freedom once he arrives on U.S. soil. One way or the other he’ll be able to do the work soon enough, even if he gives orders from a jail cell about which music clip to use and where exactly to cut, etc. 2009 technology will find a way.

The people who requested the Swiss to detain Polanski — the U.S. Marshals Southwest Regional Fugitive Task Force (representing the Los Angeles D.A.’s office) plus U.S. State and Justice department officials — are, according to this 9.29 story, so caught up in their bureaucratic rigamarole that “the expected U.S. extradition request” regarding the delivery of Polanski to U.S. soil “has not yet been received by the Swiss.”

This is the slow-as-molasses American legal system. Anyone who’s ever gotten a ticket from a Highway Patrolman and then waited at least 20 minutes as he sits in his car and slowly fills out the ticket with the squawking radio going the whole time knows the truth of this.

Can you imagine being the guy in charge of flying Polanski back to the U.S. and asking a subordinate, “So the Swiss have our formal extradition request…right?” And being told, “Well, they’ll have it before too long.” And you saying, “Whaddaya mean, it’s not ready? You guys have known we’d be arresting him in Zurich for the last two or three weeks…what have you been doing?” And the subordinate saying, “Well, we were just told there’s this extra form that Justice needs, and it requires eight separate signatures and two of them are out sick.”

You have to wait until the 7:00 mark for Arianna Huffington and the Morning Joe gang to talk about the Polanski case. First they run a tape of Zurich Film Festival jury member Debra Winger protesting the arrest, Arianna then compares Polanski to Pablo Picasso (the title of her Picasso biography described him as a “creator and destroyer“) but also wonders “if this is the best use of everyone’s time and energy.”

In response to this a shocked Mika Brzezinski goes “wow” and then suggests with zero proof was Polanski might be (or might have been) some kind of chronic offender with underage girls. (Pat Buchanan later seconds this suspicion,.) And then Mike Barnacle and Willie Geist wonder “why now?” If only they’d bothered to read Michael Wolff‘s 9.28 Newser piece.

He’s such a happy skeleton. Joyous, really. “I love you…I really do.” And all the smiling suck-ups and fair-weather androids on the rehearsal set are right in step with the sassy “oooh!” vibe. “Michael has a depth to him that people don’t really know,” one is heard saying. In other words, Jackson, who never missed a trick marketing-wise, did a brilliant job of convincing people otherwise for the previous 30 years? Life is

It really does say something about the spiritual life of the American Eloi that tickets to this film (which opens on 10.28) are selling like hotcakes. Photographers who are into American grotesques will want to show up on opening night and take shots of the crowds coming out, or going in. I plan to be there, at least.

Everyone hated Arthur Penn‘s The Missouri Breaks when it first came out in May 1976 — it was a critical and commercial wipeout — and nobody I know or read talks about it with any particular affection today, and to my knowledge no big-hearted F.X. Feeney type has come along to try and rescue its reputation. And yet it has seemed to linger in the shared consciousness of serious movie fandom.

I personally think of it as a half-good film. It doesn’t tell anything close to an intriguing story, or even one that adds up. At best it’s about interesting dabs of paint rather than the canvas as a whole. And yet every so often I watch it and for whatever reason, stay with it to the end. Why is that?

Jack Nicholson‘s performance is subdued and affected and close to dull, and Marlon Brando‘s Lee Clayton is solely about acting for a paycheck, boredom on the set and brazen showboating — he’s not really in the film. (“Here‘s an interesting little scene in which their characters first meet.) And I depise that harmonica cue signalling that the climax of the train-robbery sequence is supposed to be funny.

And yet The Missouri Breaks has a decent amount of flavor and aroma, ironically, in part, due to Brando’s half-fascinating, half-infuritating locoweed behavior. And due to those two hanging scenes, that Nicholson-Brando “I just slit your throat” scene, that quick scene when John Ryan meets the farmer’s wife behind the barn after dinner for a quickie, that horse-rustling scene in Canada and so on.

After one horse drowned and several others were injured, including one by an American Humane Association-prohibited tripwire, The Missouri Breaks was placed on the AHA’s “unacceptable” list.