Boiled down, The Wrap‘s Sharon Waxman is reporting that Universal Studios President Ron Meyer intends to whack the studio’s two co-chairmen Marc Shmuger and David Linde and most likely replace them with marketing chief Adam Fogelson and head of production Donna Langley. 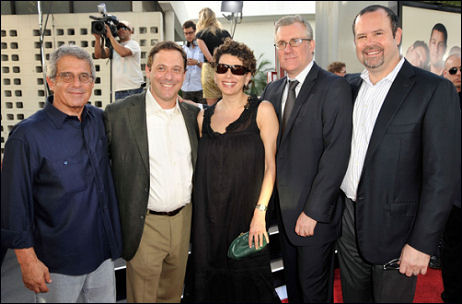 It’s a tough game, running a big-studio film division. Hard to survive, much less “win.” I feel sorry for Schmuger-Linde if this is about to happen. And if it’s not, I still feel sorry for them.

Apart from weak or underwhelming performances of such Universal pics as Bruno, Funny People, Public Enemies, Duplicity, Land of the Lost and State of Play, the beef against Schmuger-Linde, Waxman reports, is that certain producers working with the studio — Brian Grazer, Sean Daniel, Working Title’s Tim Bevan and Eric Fellner — have complained about “being unable to get a consistent answer from a single executive to passive-aggressive eye-rolling from Universal colleagues.

“Producers and talent say they are unable to get clarity on their projects in the current climate ,” she writes. “‘If you’re a producer, you’re feeling chaos in ways that you’ve never felt before,” a prominent anonymous exec tells Waxman. ‘It’s completely taken the fun out of the process.'” Fun?