Mel Gibson is only 53, but with that jowly, weathered face and heavily-graying hair and that thinning forward thatch and that burly, beer-gutty, don’t-work-out-much physique, he looks like a guy pushing 60 if not a bit older. I know guys who work in hardware stores or auto-parts stores who look like this. Nice dependable guys and all, but movie stars are supposed to look…I don’t know, a little trimmer and tonier. More of a Pierce Brosnan thing going on…right? 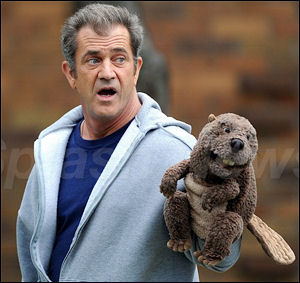 There’s no contract that says a guy who nine years ago was regarded as moderately hunky or at least in very presentable shape for someone in his mid 40s (in films like What Women Want and Signs) has to remain that way as he gets older. But there is this admittedly old-fashioned idea that movie actors are supposed to look a little spiffier and more 24 Hour Fitnessy than Average Joes of a similar age. Gibson seems to have said to himself a while ago, “The hell with that…my hunk days are over…time for my Jack Nicholson phase, only grayer.”