As I’ve said before, the picket-sign sentiments of the yahoo teabaggers — who had a big protest rally yesterday in Washington, D.C. — aren’t just despicable. They also allow you to at least comprehend (i.e., obviously without sympathizing) why the Russian, Chinese and Cuban Communists made a point of imprisoning and wiping out the teabaggers in their cultures after they took over in 1917, 1949 and 1959. “We’re losing our country,” an elderly teabagger told a reporter yesterday. “We think the Muslims are moving in and taking over.” 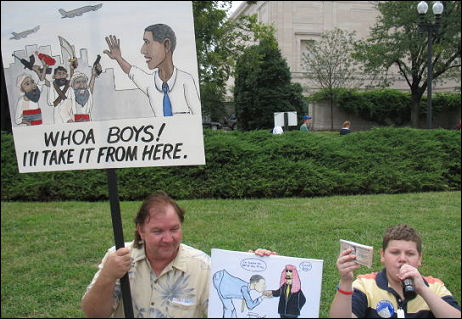 ABC News reported that the rally drew somewhere between 60 and 70 thousand protestors.

“I’ve been loath to admit that the shrieking lunacy of the summer — the frantic efforts to paint our first black president as the Other, a foreigner, socialist, fascist, Marxist, racist, Commie, Nazi; a cad who would snuff old people; a snake who would indoctrinate kids — had much to do with race,” N.Y. Times columnist Maureen Dowd says this morning.

“I tended to agree with some Obama advisers that Democratic presidents typically have provoked a frothing response from paranoids — from Father Coughlin against F.D.R. to Joe McCarthy against Truman to the John Birchers against J.F.K. and the vast right-wing conspiracy against Bill Clinton.

“But Rep. Joe Wilson‘s shocking disrespect for the office of the president — no Democrat ever shouted ‘liar’ at W. when he was hawking a fake case for war in Iraq — convinced me: Some people just can’t believe a black man is president and will never accept it.” 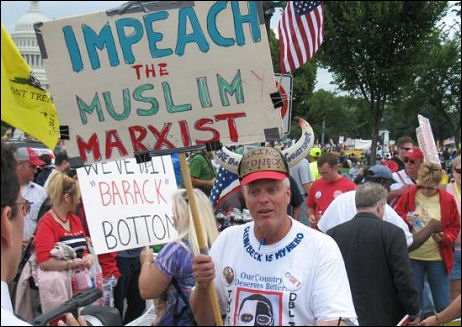 September 13, 2009by Jeffrey Wells45 Comments
« Previous post
Later Than I Thought
Next post »
Day In The Life