We can’t expect Hollywood’s Eloi-catering commercial forces to pay official tribute to an almost 70-year-old classic film, but it seems fundamentally wrong that there isn’t some kind of official memorial somewhere to Orson Welles‘ Citizen Kane. And what better place to have this memorial than the Palace theatre on Broadway and 47th, where Kane had its grand debut in on or about May 1, 1941? 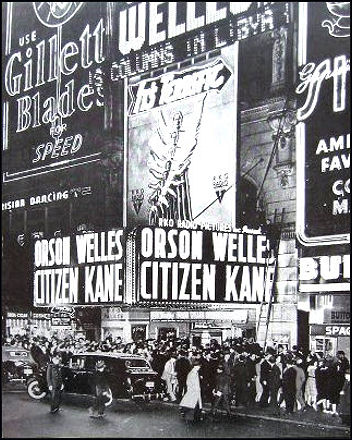 You can find memorial statues and stones and museum exhibits at every major historical site in this country, from the remnants of the Alamo in San Antonio to the huge sloping field where the 1969 Woodstock festival took place to the location of 1863 Gettysburg battle to the JFK assassination museum in Dealey Plaza in Dallas. Hollywood history is also remembered here and there. The site of the original Jesse Lasky players can be found on L.A.’s Cahuenga Blvd., and there are brass plaques mounted on the Warner Bros. sound stages that list the films that were long ago shot within (Casablanca, Yankee Doodle Dandy, etc.).

But there’s nothing that pays tribute to the debut of Citizen Kane — obviously a seminal event in American motion picture history — at the Palace. It was the site of the film’s greatest hour in terms of contemporary audience reception, and it shouldn’t be forgotten that it was a small miracle that the film opened at all, given the pressures upon exhibitors and newspapers from the Hearst Corporation to bury the film, or at least have it officially ignored. It was quite a film and quite an event, and it just seems wrong — disrespectful, at the very least — that there’s not a plaque or some modest glass-enclosed display within the Palace (which is now showing West Side Story to the rubes) that acknowledges this seminal event.