I should have already linked to this 9.17 Steven Zeitchik/Risky Business piece about Samuel Maoz‘s Lebanon, a purportedly tense account of an Israeli tank crew fighting in the Israel-Lebanon war in 1982 (and, of course, another Toronto movie I didn’t manage to see). 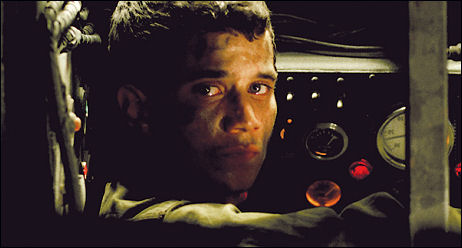 “It’s inevitable, given both the gritty battlefield setting and the North American festival where it made its splash, that Lebanon would be compared to The Hurt Locker,” Zeitchick observed.

“There are a couple of important differences between Kathryn Bigelow‘s hair-raising look at American bomb-defusers in Iraq, which premiered at Toronto in ’08, and Maoz’s film. There’s more context and backstory for the soldiers in Locker than there is in the neo-verite, in-the-moment Lebanon, for instance.

“But the analogy is mostly on-point. Both pics are brutally effective at conveying some pretty tricky things: the abject fear soldiers feel; the terrible things they sometimes do; the examination of war in all its horror, both the tragedies and the banalities (Lebanon is especially good at the latter, giving a strong sense of the extreme physical and psychological discomfort of life inside an armored vehicle.)

“Waltz With Bashir has also been mentioned, and it’s not a bad reference point either. Both it and Lebanon are autobiographical accounts of the same war by former Israeli soldiers, though there’s none of the abstracting effect of animation here. It’s purely visceral filmmaking.

“Nearly the entire movie is set inside the tank (we see the outside world through the same lens that the gunman does). That may prompt some viewers to cry claustrophobia, but it’s also the movie’s great asset. Most big screen battle scenes give the viewer more information than any single soldier has access to. In Lebanon, however, we know only what they know and nothing more, which puts us right there with them. When they feel fear and isolation, we feel it too.

“There’s a scene in which the young crew gets stranded in enemy territory that’s reminiscent of The Blair Witch Project — they’re young, they realize they’re in way over their heads, there’s a great danger lurking out there that they can’t see but know is coming right for them — and in many ways is a lot more chilling. (No teary flashlight scenes, though.)”