In Contention‘s Guy Lodge, filing from the Venice Film festival, is calling Steven Soderbergh‘s The Informant! (Warner Bros., 9.18) “a flip, frisky entertainment that may well represent the year’s most audacious feat of adaptation.” 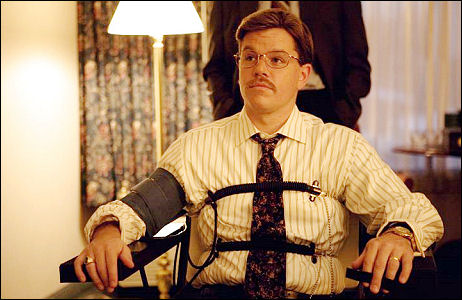 Yeah, but does it work? I’ve heard that it does and also that it doesn’t quite. But either way Marvin Hamlisch‘s score is an arch and fuddy-duddy character in itself.

Imagine standing in a 7-11 parking lot with a couple of homies at 10:45 pm, and one of them asks what’s good and you say The Informant!, and the guy says, “Oh, yeah…what’s good about it?” And you go, “Well, it’s, uhm…because it may be the year’s most audacious feat of adaptation! And it’s, like, frisky!” You can’t say stuff like this in a parking lot. You need to look the bro’ in the face and give him the lowdown.

Okay, back to Lodge…

“Screenwriter Scott Z. Burns (The Bourne Ultimatum) has reimagined Kurt Eichenwald‘s dense non-fiction thriller about a mid-1990s agribusiness price-fixing scandal as a rapid-fire corporate comedy of errors, like The Insider as filtered through the dry whimsy of Preston Sturges.

“It’s a double or nothing strategy that merrily pays off, offering rich comic defends as the true-life nature of the material elevates its absurdity, but — far more surprisingly — not sacrificing the sense of consequence and complexity in the events at hand.

“Critically touching on both the antisocial nature of corporate American greed and the inefficiency of the government in curbing it, the film actually makes an elegant companion piece to its its festival compatriot, Michael Moore‘s Capitalism: A Love Story. 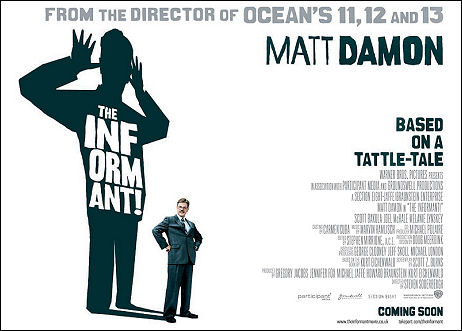 “The perspective Soderbergh presents here, however, is a lot less judgmental or clear-cut than Moore’s, thanks in no small part to the guiding presence of Matt Damon, whose subtle, malleable characterization here keeps framing and reframing the film’s own ethical stance.

“Damon plays Mark Whitacre, a folksy, seemingly guileless Cornell grad and up-and-comer at agricultural behemoth ADM, with whose illegal price-fixing of food additive lysine he is complicit, until his aggrieved wife (an affecting Melanie Lynskey) urges him to turn whistleblower for the FBI.

“And so begins several years of eager — if not particularly adept — duplicity on Whitacre’s part, but just as the FBI close in the company, Whitacre’s personal web of business indiscretions begins to unravel.

“The brilliance of Damon’s performance — and, consequently, the pleasure of the film — lies in the fact that Whitacre is by turn a lot smarter and a lot dumber than people take him for.

“We never quite gauge the reliability of his narration until the final reel; not unlike his otherwise wholly different turn in The Talented Mr. Ripley, he reveals the psychological cracks in the makeup of the American everyman so incrementally that you hardly notice until it’s too late. Aided by a deadpan comic fluidity the actor has never controlled so comfortably, it’s the finest work of his career.

“Soderbergh, meanwhile, matches Damon’s playfulness by channelling the knockabout tone of socially aware 1970s comedies like The Candidate, right down to details like the lurid opening credits and a cheerfully antiquated score (his first for a feature in 13 years) from Marvin Hamlisch. 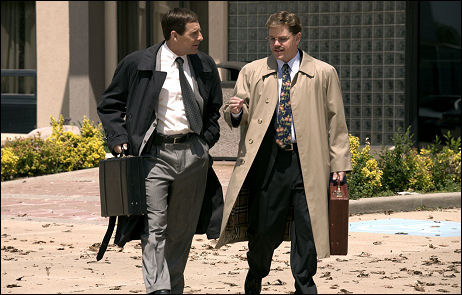 “The hyper-self-reflexive trappings can grow a claustrophobic over the course of an entire feature, and the storytelling lags a little at both ends — this is a film that could have benefitted from clocking in at a crisp 90 minutes. But Burns’ busy, persistently witty flow of dialogue (most amusing of all in the non-sequitur-laden stream-of-consciousness voiceover of Damon’s inner thoughts) generally distracts us from such structural quibbles.”

The short verdict, I suppose, is “wait for Toronto.”

Thanks again to the good folks at Warner Bros. publicity who blocked me from seeing The Informant! at New York press screenings despite persistent pleadings. I was just trying to lighten my Toronto load and would have held all reactions until the first Toronto showings. Deeply appreciated, anything I can do in return, etc.

UPDATE: Todd McCarthy‘s just-up Variety review opens as follows: “The wacky little brother of Erin Brockovich, The Informant! goofs around lightheartedly while still doing some justice to the true-life story of a zealous but wildly delusional corporate whistle-blower.

“A larky outing for director Steven Soderbergh after the somber rigors of Che and The Girlfriend Experience, the pic showcases an excellent performance by a chubbed-out Matt Damon as a Midwestern executive who’s so smart he’s dumb.

“Amusingly eccentric rather than outright funny, this Warner Bros. release will have to rely mostly on Damon for its B.O., which looks to be modest.”