The Toronto Star‘s Rob Salem reported this morning that director Kevin Smith “has all but confirmed the rumors that he and Bruce Willis did not get along on the set of their recently completed comedy, A Couple of Dicks. 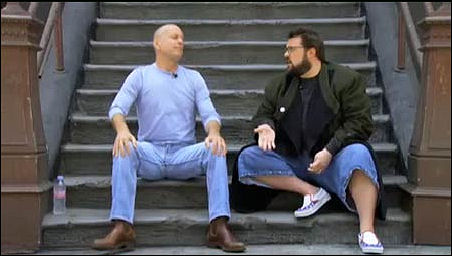 “Speaking at the recent New York wrap party for the film, Smith reportedly used the F-word adjective while referring to the absent Willis as a dick, a likely loaded reference to the movie’s punny title.

“In an interview with the Toronto Star, Smith spoke enthusiastically about the film, the first he has directed but not written himself. ‘It was a lot of fun,’ he said. ‘I didn’t write it, so it was never like, `My way is the right way.’ I was not the be-all and end-all authority…I listened to everybody.”

“But when asked about Willis, there was a pregnant pause. ‘Yeah, I got to work with Bruce Willis,’ he allowed, sounding anything but sincere. ‘Everybody should do that once before they die. It’s tough to direct Bruce Willis…to say the least.'”