After seeing this morning’s 9 am screening of The Road (which I didn’t have time to grapple with to any degree), I made it over to the Cumberland for the 11:30 am showing of Luca Guagadnino’s I Am Love, which I’d been persuaded to see by Jay Weissberg‘s 9.7 Variety review. 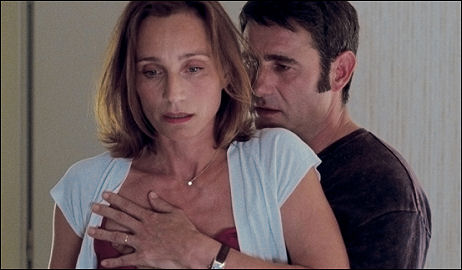 I found my seat, the lights went down, the film began, and 10 minutes later I was having second thoughts. An allegedly Visconti-like portrait of a wealthy Milanese family and a gradual manifestation of threats to the order of things, it began quietly and reservedly. Preparations for a family dinner, cityscapes of a snow-covered Milan, and the gradual introduction of family members. I’m ashamed to admit that I began to feel antsy. I felt a lack of edge and subversion. Deep down, I suppose, I didn’t really want to wade into a new Visconti; I wanted a Marxist Pasolini.

And I began to think more and more about Catherine Corsini‘s Partir (i.e., Leaving), the Kristin Scott Thomas-Serge Lopez drama about a mad extra-marital affair, that was just starting in another Cumberland theatre two floors below. I have a thing for KST and a fascination for dramas about cheating. Did I feel guilty about blowing off I Am Love? Of course, but with so many films playing at TIFF and not enough time to fit even a fraction of them in, you have to trust your snap judgments. So I bailed.

Set in Nimes, Partir is about an upper middle-class wife of a doctor and a physical therapy specialist (Thomas) who gradually and somewhat accidentally falls for an ex-con laborer (Lopez) who’s working on a rear-cottage conversion in her back yard. It sounds like a stretch — women of means never sleep with the help — but it happens in a step-by-step, emotionally plausible way that didn’t throw me out of the film. The affair consumes, and within a day or two KST decides to tell her doctor husband (Yvan Attal) what’s going on. She tells him it’s over but of course it isn’t.

So she moves out, leaving not just her spouse but two teenaged kids. And then Attal, bent silly with rage, uses his political contacts to make life financially unbearable for KST and Lopez, cutting off work opportunities and such. And when their money really starts to evaporate, she gets desperate and turns to theft. The cops are tipped, Lopez gets arrested, and KST moves back with her family when Attal promises to let him her lover skate. But she can’t handle the deal and submitting to what feels like punishment sex in the marital bed, and she goes nuts. I won’t spill what happens, but the audience began to murmur and chortle when the final act occured.

It doesn’t quite work. We all understand getting carried away with passion, but women always take a hard look at the monetary underpinnings of any relationship, and I’m sorry but I didn’t believe that KST would lose it to this degree. I know for sure that the story wouldn’t fly if were re-shot for an American audience. Certainly not in this recession. But the first half of the film does work and rather nicely at that, and I was more or less content with this. I didn’t leave angrily. I just told myself, “Okay, you took a chance and it didn’t quite pan out.”

And to hear it from Robert Koehler, who’s not the type to bail on a film after 15 minutes, I Am Love does pan out. So okay, I half blew it. But that’s a film festival for you. You have to think on your feet and take your chances. I’ll catch I Am Love later in the week. Sorry.