Michael Hoffman‘s The Last Station, a reportedly right-down-the-middle period biopic about the waning days of Russian novelist Leo Tolstoy (Christopher Plummer), had a screening yesterday at the Tellruide Film Festival. It’s basically about Tolstoy and his wife Sofya (Helen Mirren) an assistant (James McAvoy) and an admirer/advisor (Paul Giamatti) huddling and debating about his financial health and potential and whatnot. 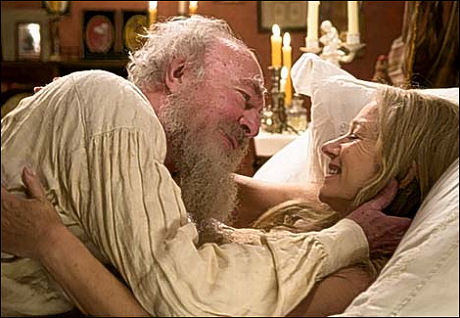 One of HE’s Telluride pallies (i.e., “buckzollo”) wrote after the screening that the crowd stood and cheered and ate it right up. “It puts Plummer and Mirren right into the Best Actor/Actress contention lists,” he declared, “along with Hoffman for Best Director. No question.” Fine — noted.

Indiewire‘s Anne Thompson describes it thusly: “Plummer plays the aged Tolstoy, the famed Russian author of War and Peace, being constantly at war with his mercurial wife Sophya (Mirren). Giamatti, a scheming Tolstoy disciple, wants to share the author’s copyrights with the masses, while Sophya fights for her husband’s love and her children’s inheritance. Caught in the middle is Tolstoy’s loyal, vegetarian, celibate secretary (McAvoy).

“Plummer and Mirren are equally matched blazing adversaries and McAvoy is wonderfully reactive as the virginal acolyte who not only loses his innocence, but starts to learn about love and marriage.

“This German-financed $17-million movie is gorgeous — shot in the former East Germany — and utterly accessible and entertaining. The audience ate it up. This is one of those movies that’s not so much a critic’s picture as an adult crowd-pleaser. It seems well-matched to The Weinstein Co., Miramax or Goldwyn.” Goldwyn? Not Fox Searchlight?

“The question of future awards potential is strictly a matter of which distrib picks it up and when they release it. While IFC is talking with seller Robbie Little, the movie will next be shown at AFI Fest.”