Peter Howell‘s Toronto Film Festival Buzz Poll came out this morning, and it’s already behind the eight ball. This is because Werner Herzog‘s already tarnished My Son, My Son, What Have Ye Done? (to go by one emphatically negative Venice Film Festival review) has been named by certain “anointed cinephiles” as one of the two most buzzed-about TIFF films, the other being Jason Reitman‘s Up In The Air. 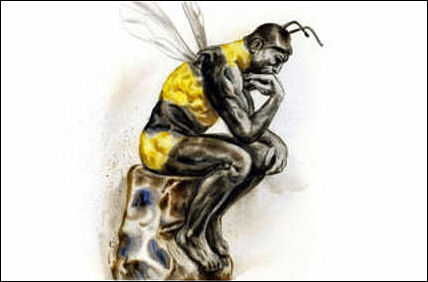 On top of which Herzog’s other film, Bad Lieutenant: Port of Call New Orleans, is tied for second place in Howell’s survey (having gotten three votes along with three other TIFF films), and it too has already been at least half-dismissed by Venice Film Festival critics as a possibly half-serious Herzogian noir and a half-looney-tunes WTF? crazy-cop Nic Cage drama that doesn’t seem to have itself figured out all that well.

So you’re reading the reactions of Howell’s 25 know-it-alls and wondering, “Wait…do any of these people know anything? Aren’t they supposed to be, like, plugged in on some insect-antennae level? Couldn’t they sense what was probably going to happen with these Herzog films?” I myself am very much looking forward to both Herzogs, but there’s no way I would put them at the top of my list. I mean, you need to step back and apply a little perspective when you compose these things.

The other three that tied for second place with three votes each were John Hillcoat‘s The Road, Reg Harkema‘s Leslie, My Name is Evil, and Lars von Trier‘s spookfest Antichrist. I don’t know about Karkema’s film but what kind of weed could the panelists have been smoking to be seriously cranked up about seeing AntiChrist? If I hadn’t seen it in Cannes I would certainly have it on my list because of the controversy and the Von Trier stamp, but would I name it as one of my top three? Of course not. Ditto The Road — certainly required viewing but hardly a top-of-the-lister.

If I had been Howell I would have written the folks who voted for the Hillcoat, the Von Trier and the two Herzogs and said, “Look, guys…these just aren’t very cutting-edge choices. They indicate a lack of awareness and not-very-sharply-attuned sensitivity to what’s going on out there. I’m trying to do you a favor and spare you some needless embarassment, okay? Please think it over again and come back to me with new choices 24 hours from now.”

Howell insists that contributors provide ultra-concise, one-sentence reasons why they’ve chosen this or that film. I tried to adhere to this but he mutilated my copy regardless. I understand the process and of course bear no grudge, but I’m running both versions here so HE readers can consider and compare.

Here’s how Howell ran my picks and my reasons: “Up in the Air: ‘The research-screening word has been excellent, and George Clooney as a suit-and-tie guy who fires people for a living is perfect!’ A Serious Man: ‘Because of a general blind faith in the Coen brothers, especially when they’re in a sombre/satiric mode, and because the `Jews in 1960s Minnesota’ thing is right out of their own cultural and historical backyard.’ Mother and Child: ‘Rodrigo García is Hollywood’s reigning south-of-the-border soul man in terms of dramatizing women’s emotional issues.'”

And here’s what I sent him:

Jason Reitman‘s Up In The Air because (a) the research-screening word has been excellent, (b) George Clooney as a suit-and-tie guy who fires people for a living — perfect!, (c) I’ve read half the script and had a good time with it, and (d) Reitman’s career and creative mojo are in an upward trajectory.

Joel and Ethan Coen‘s A Serious Man because (a) of a general blind faith in the Coens, especially when they’re in a somber/satiric mode, and (b) because the “Jews in 1960s Minnesota” thing is right out of their own cultural & historical backyard.

Rodrigo Garcia‘s Mother and Child because (a) Garcia is Hollywood’s reigning south-of-the-border Soul Man in terms of dramatizing women’s emotional issues, and because (b) one of the shorts in Garcia’s Nine Lives — a piece called “Diana” with Robin Wright Penn and Jason Isaacs — is the most intensely emotional portrayal of an unresolved relationship that I’ve ever seen in a film. On top of which Mother and Child has been produced by the Cha Cha Cha guys — Guillermo del Toro, Alfonso Cuaron and Alejandro Gonzalez Inarritu.